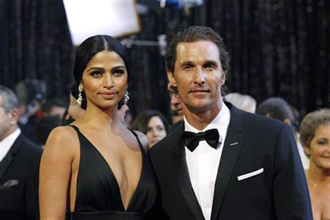 NEW YORK - Actor Matthew McConaughey and Brazilian model Camila Alves tied the knot on Saturday in an intimate wedding at the couple’s home in Austin, Texas, according to media reports.

A Texas native, McConaughey announced at the Texas Hall of Fame gala in March that he and Alves were relocating from California to Texas to raise their almost 4-year-old son, Levi, and 2-year-old daughter, Vida.

Alves is a model and handbag designer originally from Brazil, where she spent much of her childhood on the beaches of the country’s Bahia state.

McConaughey announced the couple’s engagement on December 25, 2011, via his WhoSay web page, where he posted a picture of the couple kissing with the message, “just asked camila to marry me, merry Christmas.”

“Magic Mike,” McConaughey’s latest film in which he plays a strip club manager, is set to hit theaters on June 29.