‘Once’ wins a whopping 8 Tony Awards at emotionally charged ceremony

‘Once’ wins a whopping 8 Tony Awards at emotionally charged ceremony 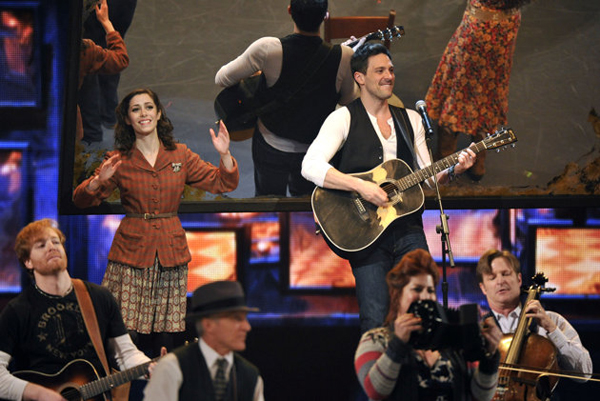 NEW YORK - The bittersweet musical “Once” captured eight Tony Awards on Sunday, including best direction of a musical, best lead actor in a musical and the top musical prize itself.

The inventive play “Peter and the Starcatcher” was next with five awards, but most every show came away with something to crow about.

Audra McDonald was named best lead actress in a musical, and her “The Gershwins’ Porgy and Bess” was named best musical revival. This is her fifth Tony Award, tying the competitive record held by Angela Lansbury and Julie Harris.

“I was a little girl with a potbelly and afro puffs, hyperactive and overdramatic. And I found the theater, and I found my home,” McDonald said. Looking at her daughter, she said her big night wasn’t as wonderful as the night her daughter was born.

Her one-time co-star in “110 in the Shade,” Steve Kazee, a 36-year-old rising star and guitar player with matinee idol looks, emerged as best actor in a musical, and broke down thinking of his mother, who died Easter Sunday.

Accepting the award from presenter Christopher Plummer, Arianda admitted something very personal to the 82-year-old Plummer: “You were my first crush!” she squealed.

In perhaps the biggest shock of the night, James Corden nabbed the lead acting Tony Award in a play for his clownish turn in the British import “One Man, Two Guvnors.” He beat out the favorite: Philip Seymour Hoffman in “Death of a Salesman.”

Corden directed most of his comment to his girlfriend, Julia, who gave birth to his son a year ago and whom he intends to marry soon.