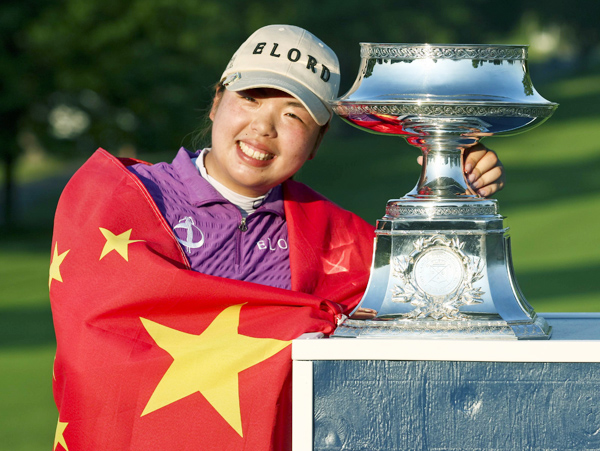 Shanshan Feng of China holds the trophy after winning the LPGA Golf Championship in Pittsford, New York, on Sunday. [REUTERS/YONHAP]


PITTSFORD, N.Y. - Shanshan Feng became the first Chinese golfer to win a major title by firing a bogey-free five-under-par 67 on Sunday to capture the LPGA Championship by two strokes.

The 22-year-old from Beijing, who began golfing at age 10 and came to America as a teen before joining the LPGA in 2008, took her first career LPGA triumph by finishing 72 holes at on six-under 282 the Locust Hill Country Club near Rochester, New York.

“I still can’t believe I won a major. It just feels so good,” Feng said. “I’m just so excited right now. I did it.”

Feng, whose victory was worth $375,000, will rise from 10th to fourth in the world ranking. She had the week’s low round on the final day.

“My goal for the year was to win on the LPGA Tour and a top 10 in a major. I did them at one time,” Feng said.

But as meaningful as the shock victory was for Feng, it could resonate far more in China, which opened its first golf course in 1984, only five years before Feng was born.

“Golf wasn’t that popular in China,” Feng said. “I was lucky to have a chance to start.”

Feng, who asked television commentators to call her “Jenny,” said she had planned to play upcoming LPGA events, but will instead celebrate her victory with a trip home to China. She plans to play from July 5 to 8 in the U.S. Women’s Open.

A startled Feng exclaimed, “Oh my God,” when she saw the winner’s trophy and where her name would be engraved beside that of World No. 1 Yani Tseng of Taiwan, the five-time major winner.

Despite lingering political tensions between their homelands, Feng said she and Tseng get along well and Feng one day hopes to match Tseng’s success by reaching the top of the rankings.

“I’m still chasing her,” Feng said. “But maybe I got a little closer.”

In a strong amateur career in China, Feng won nine titles, including the China Women’s Amateur title from 2004 through 2006.

Feng shared the runner-up spot in February’s HSBC Women’s Champions event in Singapore to match her best LPGA result to that point, runner-up efforts in last year’s Mizuno Classic and the 2008 Bell Micro LPGA Classic. “This means a lot for me,” Feng said.

“This is my fifth year on the tour. I had no winning. I was down. I was thinking, ‘Could I win again?’ Now I know I can win again.”