Italy battles Spain to a draw; Croatia turns away Ireland

Italy battles Spain to a draw; Croatia turns away Ireland 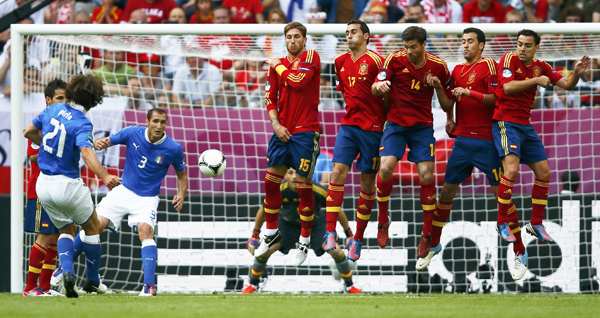 Italy’s Andrea Pirlo, left, takes a free kick during the Group C Euro 2012 football match against Spain in Gdansk, Poland, on Sunday. The match ended in a 1-1 draw. [REUTERS/YONHAP]

With both sides probably happy to emerge with a point apiece from their Group C opener, Croatia then boosted its hopes of challenging for a quarter-final place by beating Ireland 3-1 in the Polish city of Poznan.

Spain, the clear tournament favorite after mesmerizing opponents to become European champions in 2008 and then world champions two years ago, saw its run of 14 straight wins in competitive matches end in the heavyweight clash in Gdansk.

Spain struggled to get into gear as a vibrant and well-organized Italy, showing it can never be discounted in major tournaments after defeats in three warmup friendlies, mixed resolute defense with moments of flair.

Despite dominating possession and having almost double the number of goal attempts, Spain lacked a knockout punch.

Vicente del Bosque faced questions as to why he started without a striker and left Fernando Torres kicking his heels on the bench for three quarters of the game, but the coach took umbrage with the pitch, rather than his team.

“A pitch that is so dry does not do football or the spectators many favors,” he said. “If the pitch had been a bit quicker, it would have been better for both teams and a better match.”

Del Bosque will hardly panic at failing to make a winning start. Spain was stunned 1-0 by Switzerland in its 2010 World Cup opener before going on to win the trophy for the first time.

The point comes as a huge boost to coach Cesare Prandelli who will take satisfaction from what proved to be an astute substitution, Di Natale finishing clinically from Andrea Pirlo’s pass just minutes after replacing the ineffective Mario Balotelli.

Croatia made a flying start to its campaign after an off-balance Mario Mandzukic headed Slaven Bilic’s side ahead after three minutes.

Sean St. Ledger headed Ireland level in the 19th minute, but Croatia regained the lead three minutes before the break when Nikica Jelavic prodded past goalkeeper Shay Given.

Ireland were rocked again at the start of the second half when Mandzukic’s header hit the post and ricocheted against the hapless Given’s head and into the net.

Croatia could be in trouble after fans celebrated their second goal by letting off firecrackers and flares. Earlier, Croatian fans threw chairs, bottles and flares at Polish riot police before the game, with three people arrested after the incident in Poznan.

Fourteen fans were also detained in the western Polish city on Saturday night after police broke up a fight.

There was also trouble in Wroclaw with two Russia fans banned from taking part in mass events after they were detained before Russia’s match with the Czech Republic on Friday.

Russia’s football federation urged fans in Poland to behave after some threw fireworks and displayed illicit banners during the Group A game.

UEFA opened disciplinary proceedings on Sunday against the German (DFB) and Portuguese (FPF) football associations following the Group B match a day earlier in Lviv, which Germany won 1-0. The European governing body charged the DFB after German fans threw what appeared to be rolled up pieces of paper at Portuguese players on several occasions in the first half. UEFA said Portugal faced proceedings for a “delayed kickoff to the second-half.” Reuters