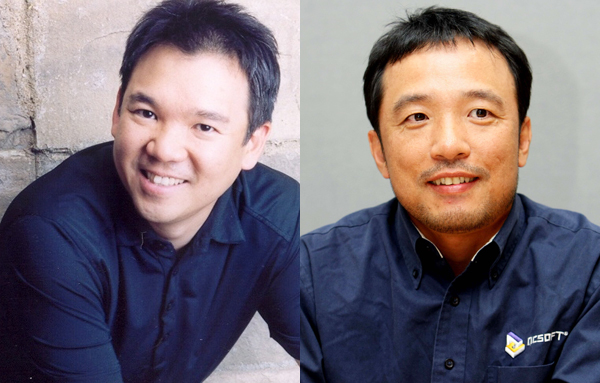 
The game industry was taken by surprise on Friday when the Japanese operation of local developer Nexon announced it had become the largest shareholder of its chief Korean rival, NC Soft.

NC Soft sold 3.3 million shares to the company at a below-market price just before it is due to release a number of new games this summer, causing market observers to question why it would give its rival a controlling stake at this sensitive time. 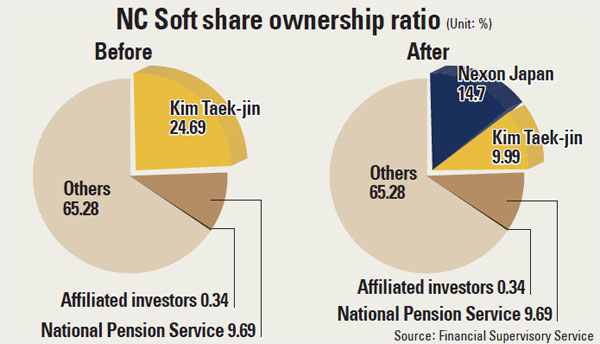 Most local analysts agreed that the de facto tie-up between the Korean companies will give them both an advantage in the global market.

In recent years, Korea’s game industry has been lacking hot titles like Blizzard’s Starcraft and NC Soft’s Lineage that are capable of satisfying local consumers’ hunger for fresh content.

The Japanese unit of Nexon said it bought a 14.7 percent of NC Soft that was previously owned by the latter’s founder, Kim Taek-jin. As a result, Kim’s ownership of the company has shrunk to 9.99 percent.

Both companies were keen to paint Nexon’s purchase as having laid the groundwork for a strategic alliance, as both Kim Taek-jin and Nexon founder Kim Jung-ju chase global expansion.

“This investment represents a new collaboration between NC Soft’s development ability and Nexon’s global publishing platform,” said Choi Seung-woo, Nexon’s CEO. “Through our long-term partnership, we hope to create more opportunities [for one another].”

NC Soft’s Kim said that due to the rapidly changing global environment of the gaming and IT industry, joining forces with Nexon was inevitable for future growth.

Others said the move would exert a negative impact on NC Soft’s stock value, which fell 4.85 percent to close at 255,000 won on the Seoul main bourse yesterday. At one point, it dropped as low as 7 percent.

As such, most pundits were puzzled by the timing of the deal.

“It’s really difficult to understand why the largest shareholder sold his stake in the company when ‘Blade and Soul’ is due to be released in less than two weeks, and ‘Guild War II’ is only a few months away from being unveiled,” said Ahn Jae-min, an analyst with Kiwoom Securities. Both games are NC Soft titles.

Some have speculated it was prompted by NC Soft encountering financial problems due to its recent investment in several games while also running a baseball team.

The game developer is estimated to have spent almost 100 billion won in developing Blade and Soul and Guild Wars 2. Additionally, it is expected to cost 20 billion won a year to keep the Dinos in Korea’s professional baseball league.

However, NC Soft was considered to be financially sound as it has 10 billion won of assets that can be liquidated at a moment’s notice, not to mention a profit surplus of around 850 billion won.

Most analysts were positive about what lies in store for the newly announced “strategic alliance.”

“There are questions that remain as to why the founder of NC Soft has given up his position as the largest shareholder, but we could expect a strategic synergy between the two as they both have different strengths and weaknesses,” said Hong Jong-gil, an analyst with Korea Investment and Securities. “It is also possible that Nexon may wish to enlarge its holding in NC Soft.”

“Furthermore, if [NC Soft’s] Kim continues to exercise his management rights, the size of Nexon’s stake may not prove to be all that important.”

“In the mid-to-long term, Nexon’s growth is likely to be limited,” said Kim. “The contribution of new games to overall revenue is extremely low, and the games it released before 2008 still account for more than 90 percent of its earnings,” Kim said.

According to his forecast, Nexon will post 15.7 percent growth in 2013 and a 17.1 percent expansion the following year.

He said that while NC Soft will continue to create a strong lineup as a developer, Nexon will offer its know-how to help expand overseas.

NC Soft, which was founded in 1997, has specialized in massively multiplayer online role-playing games (MMORPGs) such as Lineage, Lineage II, Aion and Guild Wars. However, it is still considered overdependent on the domestic market, from which it draws over 66 percent of its revenue.

In contrast, Nexon has a more diverse overseas portfolio. Last year, 37.4 percent of its revenue came from China, 32.7 percent from Korea, 14.9 percent from Japan and 7.2 percent from North America.

NC Soft’s experience is expected to contribute to Nexon’s ability to develop games for older teenagers and adults.

“The top-tier strategic alliance is more significant for Nexon than for NC Soft,” said Choi Hoon, an analyst with KB Investment and Securities. “The move will help Nexon strengthen its hardcore MMORPG genre, which was considered its weakness.”

Nexon, which was founded in 1994, has developed games such as MapleStory, Dungeon Fighter Online and KartRider. Although it is the No.1 game developer in Korea, it is known more for its ability to distribute and publish, as most of its games are more popular among younger kids, unlike NC Soft, which commands an audience of older teenagers and adults.

Nexon was founded in Seoul but is now headquartered in Tokyo. It went public last December on the Tokyo Stock Exchange.

The founders of the two game companies are Seoul National University alumni.