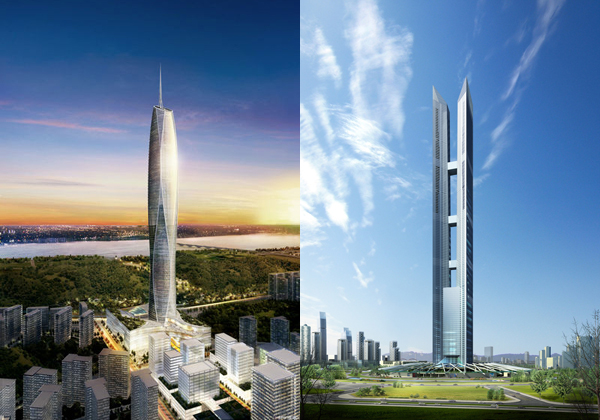 
A number of plans to build one of the world's tallest towers in Korea has gone sour due to uncertain economic prospects and a slumping real estate market. These towers were planned in the boom times of the early 2000s, but now they have become hot potatoes.

I
n early June, the developer scrapped plans for the Sangam Digital Media City Landmark building, citing concerns over the potential profitability of the megaproject.

The Seoul Metropolitan Government intended to create a landmark in Sangam-dong, western Seoul, by building a 640-meter (2,100-foot), 133-floor tower that would be the world¡¯s second-tallest skysraper.

However, the developer wanted to limit the project to 70 stories. When the two sides could not reach a compromise, the contract was nullified with the developer losing 100 billion won ($85 million), including a cancellation penalty.

The city reportedly is looking for another developer to take over the project.

Skyscrapers taller than 70 floors are expensive to build and the cost rises exponentially as the height increases. With office space becoming harder to fill and profitability uncertain, developers are reluctant to build.

"Skyscrapers now underway were planned during the economic boom in the early 2000s. If they are completed at the same time, it could create an oversupply."said Kim Tae-ho, an executive of R2Korea, a real estate information Web site.

The future also appears bleak for the Incheon Tower. The Incheon city government initially wanted a 151-floor building in the Songdo Free Economic Zone, with a groundbreaking ceremony held in 2008 and a goal of completing construction by 2014. However, work has slowed dramatically because the developer intends to reduce the height to 102 floors or less. Many analysts say it will need to be less than 100 floors to be profitable.

The Northeast Asia Trade Tower, a 312-meter landmark with 68 floors in Songdo is nearing completion. When finished, it will be the tallest building in Korea. Still, the developer is trying to sell the unfinished tower to recoup rising construction costs. Work has stopped several times due to a shortage of capital.

Even if the Northeast Asia Trade Tower is sold, the developer could incur huge losses. Starwood Capital Group has been chosen as a priority negotiator, but the price being discussed is reportedly half the construction cost of 780 billion won.

The government had grand ambitions for the free economic zones in Songdo and Incheon, but state-of-the-art buildings there stand nearly empty because potential tenants have been unwilling to relocate to the area.

Posco Engineering & Construction built a 39-story twin tower in Incheon Free Economic Zone in June 2010 and one of the buildings remains nearly empty.

Hyundai Motor Group is trying to build the 540-meter Global Business Center with 110 floors in Seongsu-dong, near Seoul Forest, northeastern Seoul. The site where the building is planned is designated for industrial and residential use and Hyundai has been asking the city to reclassify the land as commercial.

The city's role in skyscraper projects has also come under scrutiny, with many potential developers worried that city is trying to make it more difficult to build them. While the city government has reportedly been making guidelines for building skyscrapers, there are worries that the guidelines will emphasize benefits for the public over profits for developers.

Recently, the Yongsan Development Corporation unveiled detailed plans to build an international business district (IBD) in Yongsan District, central Seoul, that includes 14 skyscrapers. However, residents living in the area are against the project and say they would refuse to move out of their apartments, which would need to be demolished.

In addition, there have been questions on whether the developer would be able to attract sufficient capital to complete the project.

According to R2Korea, the rate of unoccupied office space in central Seoul is on the rise due to a glut of new buildings constructed in the capital. The rate was 5.4 percent in the first quarter of the year. In Incheon, the rate was even higher at 6.5 percent.

However, Kim Sang-dae, a professor at Korea University, is optimistic about the future of skyscrapers in the country. "When the economy improves, it will become profitable again to build skyscrapers and the demand will revive." said Kim, who is also the chairman of the Council on Tall
Buildings and Urban Habitat. "When the economy recovers, individuals will again take an interest in investing in skyscrapers. There is huge potential demand."