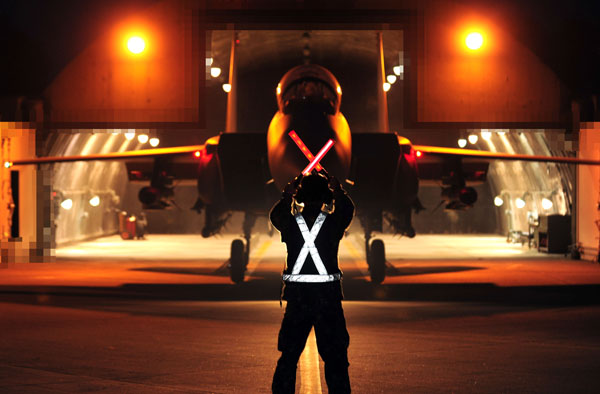 A fighter jet prepares for take-off during a spot check ordered by Korea’s Joint Chiefs of Staff. The Korean military yesterday was checking the military’s reaction posture against a long-range missile attack from North Korea. [YOYONHAP]


Pyongyang has shown an unusual amount of military activity recently, dispatching additional aircraft to frontline airfields and ordering a flight near the DMZ, according to a government official.

"North Korea has deployed a bunch of Sukhoi and MiG jet fighters to some frontline military airfields, such as those in Taetan, and Nuchon-ri, South Hwanghae," the official told the JoongAng Ilbo yesterday. "They are dramatically bulking up the military drills of those aircraft."

He did not estimate how many combat jets Pyongyang has sent to frontline areas.
The airfields in Taetan and Nuchon-ri are located 40 to 50 kilometers (24 to 31 miles) from the border with Korea, and it would take three to five minutes for a jet to get to Seoul and the Gyeonggi region.

Amid heightened tensions on the Korean Peninsula, Pyongyang is ratcheting up its anti-Seoul propaganda through China-based social networking services.

The JoongAng Ilbo found yesterday that the North Korean regime created five accounts at Weibo, a micro-blogging service in China with an estimated 250 million followers, to denounce the South Korean government and press.

The Pyongyang Broadcasting Station, a state-owned radio station, also warned yesterday of an attack on the local press or broadcasting stations in the South: "We are waiting to order [the military] to set fire to not only the Chosun Ilbo, the JoongAng Ilbo and the Dong-A Ilbo, but also to KBS, CBS, MBC, and SBS."