Older Korean guys try to be buff and beautiful

Older Korean guys try to be buff and beautiful 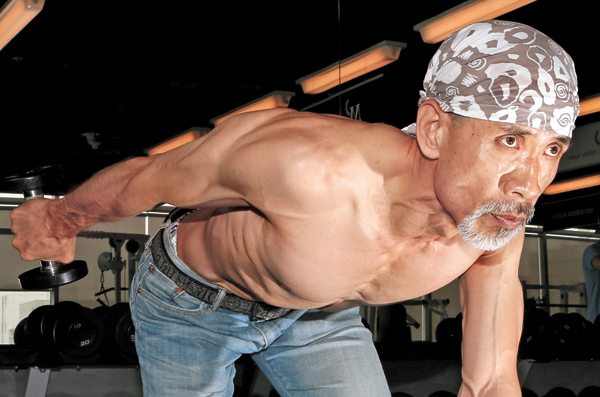 Hong Sun-gak, 57, works out at a fitness club in Cheongdam-dong, southern Seoul, on Friday. By Cho Mun-gyu


"At the beginning, they start working out for health reasons," Kim Hae-kyun, 34, a trainer at the fitness club told the JoongAng Ilbo. "But later on, most start asking questions like, 'How can I get a six-pack?' or 'How can I work on my body so I can fit into slim suits?' They're very interested in becoming a momjjang, or a fit guy."

Getting obsessed about your body over the age of 40 is often called a midlife crisis. In Korea, it¡¯s becoming a national midlife crisis. In Gangnam, the number of fitness clubs that specialize in personal training (PT) increased from about 30 in 2009 to 120. ¡°Most of new comers are older than 40,¡± the owner of a fitness club in Gangnam said.

"I decided to work out to wear jeans," a businessman surnamed Ahn, 47, said. "I haven't been able to wear jeans for 20 years. I work out for an hour with my trainer."

The most requested workouts for the older guys are six-pack development, building more defined pectoral muscles and reducing girth. In other words, they want to look hotter in more stylish and slim styles.

The "Cool Guy Contest" is a male beauty pageant for momjjang that¡¯s held every year in Seoul. This year, 44 middle age men contested, up from 28 last year. "I was encourage by my son who participated in the contest three years ago," said Hong Sun-gak, 57, the only older guy to make it in the top 25. The winner of the contest last year was 52-year-old Choi Hong, an executive at ING corporation.

Middle aged beauty fever among Korean men took off two or three years ago. "Large scale restructuring has taken its toll on jobs for men over 40 in the last few years," said Gwak Geum-joo, a psychology professor from Seoul National University. ¡"°They now think that keeping their appearances in good shape is necessary to survive in a bad economy."