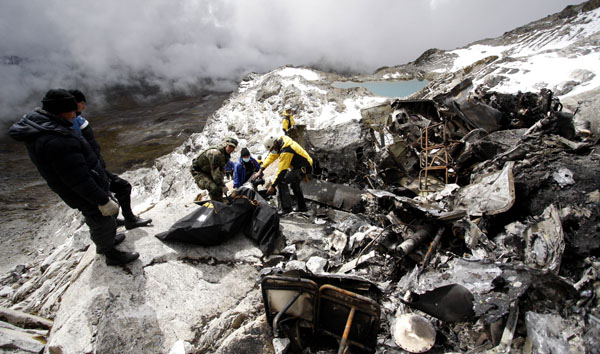 Rescuers recover the remains of casualties of a helicopter crash on Mama Rosa mountain in Ocongate, Peru, Sunday. The Sikorsky S-58ET helicopter was carrying eight South Koreans and three Peruvians as well as citizens of the Netherlands, Sweden and the Czech Republic when it crashed Wednesday at an altitude of about 16,000 feet (4,900 meters). [AP/YONHAP]


The eight Koreans aboard a helicopter that crashed into a mountain in the Andes in Peru were mostly top-notch civil engineers, according to their companies, as the faint hope that they survived gave way to grief.

One of the passengers was brother to a star Korean basketball player who was himself killed tragically in a car accident in the 1990s.

The Peruvian government said Sunday it retrieved the bodies of all 14 people aboard the ill-fated helicopter. Among them, nine were from four major Korean companies: four from Samsung C&T Corporation, one from the Korea Water Resources Corporation (K-Water), two from the Korea Engineering Consultants Corporation and two from Seoyeong Engineering. Eight of the victims were Koreans and one man, working for Samsung C&T, was Dutch.

They were all traveling on business for their companies. The helicopter was returning from the site of a potential hydro-electric power plant project being reviewed jointly by Korea and Peru. K-Water and its local partner Samsung C&T Corporation signed an MOU with the Peruvian government in March to cooperate on a $1.61 billion project to build five hydro-electric, 780 megawatt power plants on the Inambari River in Cusco, 720 kilometers southeast from Lima.

The other five people aboard the helicopter were two Peruvian pilots and three officials from Acres, a Peruvian company involved in the project, including one Peruvian, one Czech and one Swede, according to the Korean companies.

According to the companies, the project has been considered a breakthrough deal that could pave the way for local companies to make inroads in civil engineering projects in Latin America. They assigned engineers who had impressive experience and expertise in hydro-electric engineering overseas.

Kim Byung-dal from K-Water was a 50-year-old civil engineer with over 20 years of experience in dam construction and overseas projects with the state-owned company. He contributed to setting up a blueprint for a state water resource development project in Cambodia, the company said. He was also part of a K-Water team that won a 480 billion won ($411.7 million) hydro-electric power plant deal in Pakistan last year.

"He was one of the engineers well known for his expertise in water resource-related civil engineering and his death is such a loss," said Kim Duk-joon, who heads K-Water's emergence response team created after the helicopter accident.
Two of the Koreans from Samsung C&T, Kim Hyo-joon, 48, and Yoo Dong-bae, 46, were also experts in overseas engineering projects with more than 18 years of experience, the company said. Another Korean from the company, Woo Sang-dae, 39, had been involved in projects in emerging markets such as India and Africa. Kim was the brother of star basketball player Kim Hyun-joon, who won the most valuable player award twice in the Korean Basketball League in the 1980s. He was killed in a car accident in December 1999 while working as an assistant coach for the Samsung Thunders.

The other casualty from the company was Erik Kupper, a 38-year-old from the Netherlands with a 12-year career in civil engineering. He began working for Samsung C&T in February.

"He [Kupper] had not just excellent linguistic talents, but also had good work-related skills," said an official of Samsung C&T.