Gov’t coffers may open as economy sputters along

Gov’t coffers may open as economy sputters along 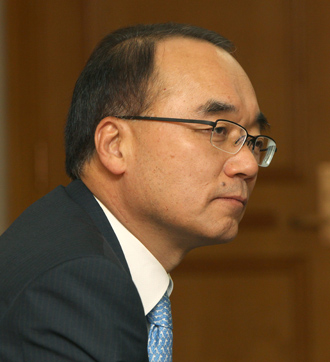 A political firestorm is erupting as opposition lawmakers urge the government to release its supplementary budget in the second half, but President Lee Myung-bak has refused to acquiesce.

The lawmakers claim that, with economic indicators pointing to a continued slowdown this year, more spending will serve as a much-needed economic stimulus.

But their demand clashes with the government’s reluctance to deviate from its stated policy of achieving a balanced budget for 2013, a goal it says it is on track to achieving.

Lee on Monday rejected the opposition camp’s demand based on the premise that “the Korean economy has strong fundamentals that can endure risks emanating from the euro zone, so the government is not considering a supplementary budget at this point.”

Refusing to budge, the Ministry of Strategy and Finance underscored at a finance meeting at Korea Exchange Bank headquarters in Euljiro, central Seoul, yesterday that balanced spending remains its top priority this year.

“The government earmarked the ‘super’ supplementary budget in 2009, because at the time, the forecast for economic growth plunged from plus 4 to minus 2 percent, with a recession clearly on the cards,” said Choi Sang-dae, an official at the ministry’s budget management department.

“But at the moment, the economy is expected to grow by 3 percent at least this year, and the number of employees rose by 460,000 in the first quarter, so it is not the right time to talk about expanding the budget.”

In what now sounds like a mixed message, Finance Minister Bahk Jae-wan mentioned last week the possibility of drawing more money from government coffers, raising the prospect of a supplementary budget being summoned to action later in the year.

Bahk acknowledged that the financial woes haunting the euro zone are likely to continue for longer than was initially expected. The minister raised the issue of releasing more government funds to guard against external shocks, but was careful to make a distinction between this and the supplemental budget.

Critics claim there is, in effect, little difference between the two except for the terminology, and that the government is using this as a face-saving maneuver.

Bahk said the exact amount and purpose of the government funds ? de facto pocket money that can be allocated for special uses ? will be announced at the end of this month. Such funds can be drawn on by the government without requiring approval from the National Assembly and are often used to support small startups or provide credit guarantees.

But Bahk’s intention to use the funds to defend the economy from external threats is seen as circumventing the stricter National Finance Law that attempts to curb reckless spending by the government.

Under the current law, which was last amended in 2006, the government can make a supplementary budget only when a war breaks out, natural disasters occur, the economy goes into a recession, the jobless rate suddenly skyrockets or inter-Korean relations become especially precarious. 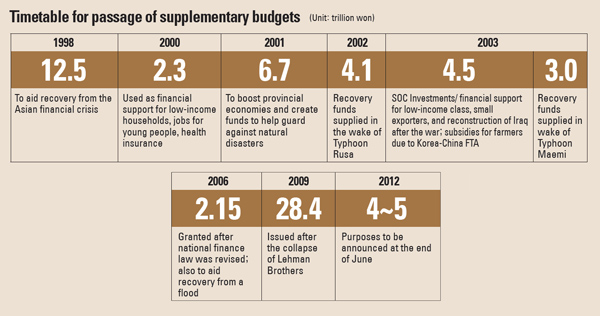 However, it seems inevitable that the government will adopt some measures to shore up the economy given that exports to the United States, China and Europe ? Korea’s three major trading partners ? dwindled over 10 percent on-year in the first quarter.

“There have been some achievements made in terms of stabilizing the economy, but much more work should be done to revitalize it,” Bahk said in explaining the need for extra funds.

Experts have given mixed opinions on the need for the supplementary budget.

“As the global economy is highly likely to remain stagnant for a long period, the government needs to prepare long-term measures, one of which can be securing a supplementary budget,” said Kim Jae-young, an economics professor at Seoul National University.

He said the euro zone woes could hurt Korea’s real economy in the long term, starting from the second half of the year.

Others, like Sung Tae-yoon, Yonsei University’s professor of economics, oppose the extra budget.

“If the real economy starts to suffer, there will still be time then to dig deeper in the budget, but now is not the time,” he said, agreeing on the forecast of a long global recession.

He said Seoul should take a long-term approach to money matters and apply any supplementary budget, if used, to boosting employment.

Meanwhile, a groundswell of opinion is tipping the Bank of Korea to lower the benchmark interest rate soon after having it kept unchanged at 3.25 percent for 12 months.

According to the Korea Center for International Finance yesterday, foreign investment banks believe the central bank is likely to cut the key rate to boost the domestic market. Bank of America Merrill Lynch and RBS said this is highly likely if Greece exits the euro in the wake of this weekend’s election there.