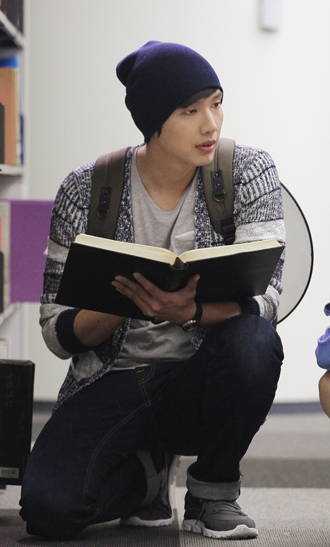 After making a seemingly spontaneous love confession at a press conference, actor Ji Hyun-woo has spoken out about his feelings for co-star Yoo In-na to clear up any confusion that his outburst may have left in the minds of fans.

“Gosh you guys like to worry! I’m fine and am not in hiding, so don’t worry,” he said on Twitter.

“I would do the same if I were to relive that moment,” he added.

At a press conference to mark the end of “Queen In-hyun’s Man” on Thursday night, Ji took the microphone and announced his love for his co-star.

Ji also took the time to reprimand nosy netizens and the press alike on Monday by advising, “You know there’s a saying that those who mind other people’s business never make it far in life, so mind your own business!”

In response to inquires about the Thursday outburst, Ji’s agency had previously said he was unreachable by phone.

Yoo’s representatives have remained tightlipped about the affair.