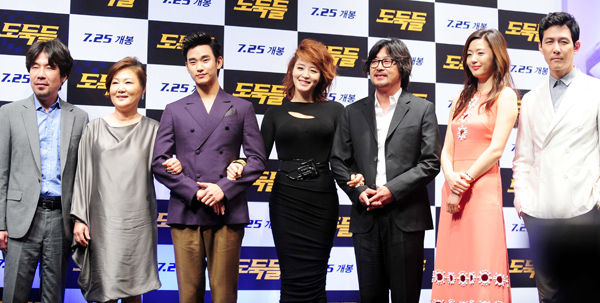 
The biggest names in Korean film are set to star in the upcoming summer blockbuster “The Thieves,” dubbed Korea’s “Ocean’s Eleven” with its megawatt leads featured as a gang of thieves.

The thought of directing this group of high-profile actors and actresses was “really scary,” confessed the director.

“At the beginning, I was worried whether Kim Hye-su and Jeon Ji-hyun might get into a fight or something,” joked Choi, during the press conference for the film yesterday at the Westin Chosun Hotel in central Seoul, adding that in the end the two leading actresses got along well and supported each other.

“Even during filming, I couldn’t take my eyes off the monitor because of the charisma of all these actors.”

On comparisons with “Ocean’s Eleven,” the director said he never went into production consciously thinking about the hit Hollywood film.

“I think the film, more than ‘Ocean’s Eleven,’ is closer to ‘Tazza’ and ‘The Big Swindle.’ Maybe there are similarities in that both films [‘The Thieves’ and ‘Ocean’s Eleven’] are about stealing, but the action featured in our film is invested with more emotion,” said Choi.

“When I saw ‘Ocean’s Eleven,’ the gang seemed really compatible and harmonious, but in ‘The Thieves,’ we are all over the place, all with our own faults,” said Kim Yoon-seok, who plays the head thief, Macao Park, in the new action blockbuster.

“But I think that you will see through the friendships and love in the film, our unique emotional developments will show through.” 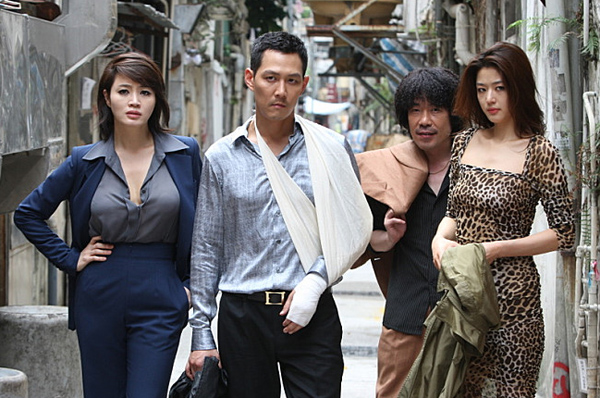 
Director Choi’s fourth feature film is set in Macau, as a group of Korean thieves are called out by legendary thief Macao Park to the region to steal a rare blue diamond worth $20 million. The gang works with a group of Hong Kong thieves, all with their own secrets and ambitions regarding the project.

Veteran actress Kim Hye-su said that the shooting of one trying scene in the film, where she is featured under water trapped in a car, tested her patience and determination as an actress.

“When the director called for one more take, I could sense a touching passion in his voice, so I did one more,” said the actress, who also starred in the “Tazza: The High Rollers” along with her co-star Kim Yoon-seok.

“When I was watching myself on the monitor afterward, I started questioning why, as an actress, I had to endure such hardship ­ for what? The director, the audience or for the sake of the film?” she said.

“It was a moment when I questioned what films are to me.”

The film also marked the return of Hallyu star Jeon Ji-hyun to the big screen, as a rope-walking thief in the film, after her recent wedding. Her love interest in “The Thieves” is fellow thief, Jampano, played by up-and-coming actor Kim Soo-hyun, who catapulted into stardom with his role in the MBC historical drama “The Moon that Embraces the Sun” this year.

“My kiss scene with Jeon Ji-hyun was easy because I was able to get immersed in the scene easily with her presence,” said the young actor, looking a bit flushed.

When asked if he is anxious about the film’s July 25th opening, which will be in theaters with Hollywood blockbusters including “The Dark Knight Rises,” director Choi joked, “I see Batman in my sleep these days.”

“But more than anything, I wish that through the film, more people outside Korea will be able to get to know these great actors.”