The actual reality of interracial relationships

The actual reality of interracial relationships 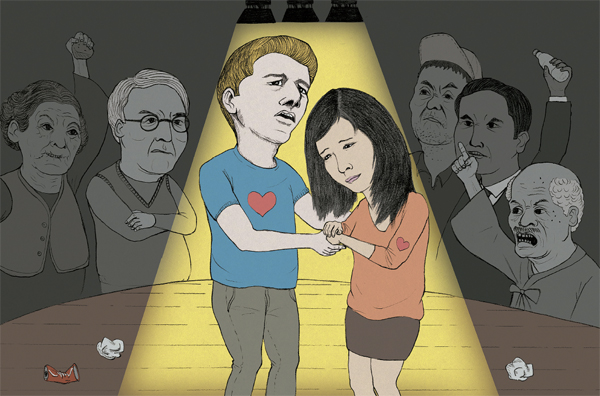 Whether to a food stall or humble restaurant with a couple of tables, Kim wasn’t that picky whenever she went on a date with her American boyfriend when she lived in Seoul. However, the last place she wanted to go was where there were going to be many ajeossi, or middle-aged men.

“I didn’t go to places like the Han River when I was on dates with my husband,” recalled Kim, a Korean-born mother of a two-year-old boy who now lives in Washington with her American husband.

Kim says it was always uncomfortable to put up with their stares just because she was holding the hand of a white man. “They looked at my boyfriend first and then stared at me from head to toe. They weren’t friendly stares.

“Sometimes I felt like I was a prostitute. So we often went to Itaewon because we were relatively free from all the stares there,” said Kim.

Like many other men and women, a mutual friend of the two fixed them up. Kim, a fluent English speaker who once lived overseas, and her husband, who was staying in Korea for business, fell in love in Seoul and married two years ago in the States.

But Kim’s parents had a lot of concerns until their daughter set the wedding date, and Kim herself kept it a secret that she was dating an American because she and her parents were well aware of how some Koreans judge Korean women who date English-speaking white men.

Thus when a controversial television show from MBC aired on May 28 and stirred up the expatriate community here, Kim wasn’t that surprised. The less than five-minute segment, titled “The Shocking Reality about Relationships with Foreigners,” depicts white men living here as exploiters of Korean women. The episode was part of a regular show titled “Saesangbogi Sisigakgak,” which roughly translates to “World, Moment by Moment” and specializes in social issues.

The show started with a recent case of American Chris Golightly, who became famous after competing on a popular audition program but eventually wound up entangled in fights with multiple Korean women. One of the girls sued him for not repaying 32 million won ($27,826)  that he borrowed from her and other girls asserted that Golightly sexually harassed them. He maintains these women are lying. The case is still ongoing.

After leading with the above case, the camera shows one random couple - a white man and Korean woman - who display affection in public. The scene is narrated with the question “Is their physical contact based on trust?” During the segment, an anonymous Korean woman says she was abandoned by her foreign boyfriend after she became pregnant.

Then another anonymous interviewee, a Korean man who claims to run an online community called “Make friends with foreigners,” says one of his female friends turned out HIV positive after dating a Caucasian man.

The show ends by saying “It is now time that we form proper and wholesome relationships with the opposite sex.”

Devoid of any relevant figures and facts, the show purports that an increasing number of Korean women fall victim to English-speaking white men who say they “have no trouble meeting women in Korea.”

After it was aired, the segment went viral among the expat community when an expat blogger reuploaded it with English subtitles on May 30. As of yesterday, about 165,000 people had viewed the clip on Youtube.

Shortly after the upload, a Facebook page was created and has thus far amassed some 8,600 members. Some members of this Facebook group protested by holding signs in front of the MBC building in Yeouido, central Seoul, earlier this month.

Response videos were also created by expats living in Seoul to oppose the show.

One man with the ID “72daystar” said, “This is sort of a mischaracterization of the foreign community as trying to victimize young Korean women.” He introduced himself as a faithful companion to his Korean wife for 11 years.

He continued by saying “Of course, there are young [foreign] men in Korea who try to date pretty young Korean women. Who would be surprised by that? But we’re looking at a smaller, smaller, smaller set to use an extreme. This is very offensive. It is hate mongering.” Another video clip uploaded by “expatkerrie” says the show was “extremely xenophobic.”

In response to the outcry from non-Korean viewers over the show, Kim Ji-wan, deputy chief of “Saesangbogi Sisigakgak,” said he couldn’t understand why foreigners were offended.

“We’re receiving a lot of calls [about the show] but I don’t understand what makes them angry. We all think the show is okay,” said Kim in a furious tone during a phone interview the Korea JoongAng Daily. “I watched the show several times and you’ve probably noticed ? we said ‘some’ foreigners make trouble.

“But why are all these foreigners making a fuss over it? Maybe because they have a guilty conscience,” added Kim.

The show was produced by independent production company All That Media, but the topic and outline for the show were decided and approved by MBC, according to Kim. MBC doesn’t have a plan to apologize to non-Korean viewers of the show.

The show, however, was problematic in the way it reported on the topic, according to JoongAng Ilbo columnist Noh Jae-hyun, who spent decades of years in journalism. He recently dealt with the show in his column for the JoongAng Ilbo.

“The title of the show was ‘The Shocking Reality’ but I was shocked by the show itself because it doesn’t even stay true to the most basic tenents of journalism,” wrote Noh. “The show was full of sensational narration and background music,” Noh added.

Segments like this from MBC raise the question of the level of xenophobia in Korea. Couple that with the recent case of an ethnic Korean from China who brutally raped, killed and dismembered a Korean woman, the question looks more pressing.

In fact, crimes of non-Korean residents are growing, but at a rate proportionate to the increasing immigrant population. According to National Police Agency, 5,221 crimes were committed by foreigners in 2002, when their numbers were 629,006, but the number went up to 10,164 in 2011, when 1.4 million foreigners were in the country.

Some sensational headlines say Korea is no longer safe from crimes by foreigners - but crimes by non-Koreans are not that high compared to those comitted by Koreans.

As of 2011, 525,469 Koreans committed violent crimes including murder, robbery and rape out of 50.7 million, which is the entire population of South Korea.
By nationality, Chinese nationals committed the most crimes in 2011, Vietnamese came in second, other collected minorities came in third and Americans came in fourth, but the figures should be represented correctly, the National Police Agency says.

“Chinese committed the most crimes, but it’s hard to say most Chinese are bad. Since the population of Chinese foreigners living here is far higher than other nationalities, the number of crimes are relatively high,” said an official from an investigation team dedicated to immigrant crimes.


The taboo of interracial couples

Kim, the mother of the 2-year-old boy living in Washington, is not the only one who felt cowed on dates.

Park, who was born and raised in Korea but now lives in Australia, also feels like Kim even though she’s lived in Sydney for about a decade.

“Korean guys with negative views [about my relationship with my boyfriend] have lived in Australia for many years. A lot of them have more conservative views than people in Korea,” said Park, who has been dating her Australian boyfriend for the past three years.

“Korea has actually developed really fast, but our mindset has not caught up with our status, I think.”

When asked if he was judged by Koreans just because he dates a Korean, he answered “Yes, all the time.” “The show was utter rubbish. I would imagine young Koreans can see further than this media beat up.”

Then why do some Koreans have negative views of Korean women and white men together in relationships? Some say it harkens back to the Korean War (1950-53).
According to a thesis entitled “Scapegoats of Divided Korea A Photographic View of Korean Women in the Military Camp Town” published last year by Park Jong-hyun and Min Byeong-wuk, “Koreans used insulting names like ‘Western princess’ to disparage women in the military camp town. It includes an attempt to hide the feeling of loss that men lost their sisters to other men.”

In such a racially homogeneous country - still the most homogenous in the world, in fact - it was hard to run across foreigners until American soldiers were stationed in Korea for the war.

After the war, therefore, the primary image most Koreans had of white men and Korean women was negative. Most women who used to live around U.S. Army camps were prostitutes. Children from those couples were often abandoned as the U.S. soldiers left for their home country and the children  the first multicultural children of Korea were dubbed half-breeds.

“After all, such an image of white men and Korean women couples still lingers in our minds. And people often point the finger at Korean women,” said Kwak Geum-ju, a professor of psychology at Seoul National University.