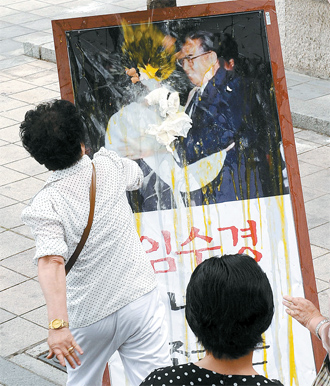 Outside the National Assembly yesterday, North Korean defectors throw eggs at a photo of proportional Representative Lim Soo-kyung with Kim Il Sung from July 1989, when Lim made an unauthorized trip to Pyongyang. Lim recently called a 28-year-old North Korean defector a “traitor.” [NEWSIS]

Denouncing the furor in South Korea over so-called “pro-North” lawmakers, North Korea said that a bunch of ruling party lawmakers, including presidential front-runner Park Geun-hye, had praised the communist regime in the past.

The North’s Committee for the Peaceful Reunification of the Fatherland, the ruling Workers’ Party’s propaganda mouthpiece, said in a statement Monday that it was nonsensical to attack leftist politicians for their pro-Pyongyang stances because some ruling Saenuri Party lawmakers also praised the North’s political system or its “dear leader” during visits to Pyongyang in the past.

“We can disclose all of the ‘pro-North’ comments of some presidential hopefuls of the ruling Saenuri Party, such as former Chairman Chung Mong-joon or Gyeonggi Gov. Kim Moon-soo,” the statement said. “If we report all of what they told us during their visits, all South Koreans will be shocked.”

“When Park made her visit to Pyongyang in May 2002, she was greeted by our ‘dear leader’ [Kim Jong-il], and visited a string of places in Pyongyang and made a bunch of ‘pro-North’ comments,” they said. “If needed, we can open all the records on what former and current Southern government officials and lawmakers did and said during their visits.”

Pyongyang has recently condemned the current controversy in the South over opposition party lawmakers, many of them former student radicals, who still uphold the North’s ideology. It said South Korean conservatives are trying to attack “people working for unification” for their own political purposes.
But suspicions are rising that the North is attempting to intervene in the South’s presidential election in December.

Park stayed in Pyongyang between May 11 and May 14 in 2002, not as a politician but as a co-president of the Europe-Korea Foundation, a nongovernmental organization that provides aid to the North. Park was accompanied by Jean-Jacques Grauhar, another co-president of the foundation.

At the time, Pyongyang hailed Park’s visit, flying her in on a private jet and giving her the same hotel room in which former President Kim Dae-jung stayed during the inter-Korean summit in 2000.

On the third day of her visit, then-leader Kim Jong-il visited her and had a closed-door, bilateral talk for an hour and a two-hour luncheon after. She was photographed with Kim.

“During the two visits, I did my best for reconciliation and cooperation of two Koreas,” Chung said in his statement on Monday. “North Korea should stop threatening to intervene in our politics. As they said, we urge them to release what high-ranking figures said at the time.”

“I have never been to Pyongyang, just Kaesong and Mount Kumgang,” Governor Kim said yesterday in a radio interview with MBC. “[In 2008], I proposed they open their economy, just like China has, but is it a problem?”

“The DUP clearly said the North Korean government shouldn’t intervene in South Korea’s presidential election,” Park Yong-jin, spokesman of the DUP, said yesterday at a briefing at the National Assembly. “We once again urge the ruling Saenuri Party not to try to hide their incompetence in dealing with economic problems by prompting the ‘color debate’ and pro-North controversies.”