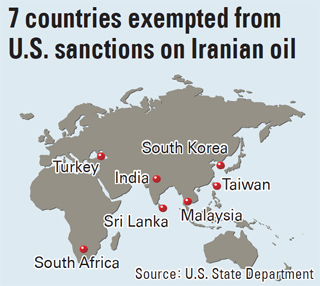 Washington said Monday that it has exempted Korea and six other countries from its sanctions for purchasing oil from Iran because all the countries made strong efforts to purchase less to go along with pressure on the Middle Eastern nation.

“Today I have made the determination that seven economies - India, Malaysia, Republic of Korea, South Africa, Sri Lanka, Turkey and Taiwan - have all significantly reduced their volume of crude oil purchases from Iran,” said U.S. Secretary of State Hillary Clinton in a statement. “As a result, I will report to the Congress that sanctions pursuant to Section 1245(d)(1) of the National Defense Authorization Act for Fiscal Year 2012 will not apply to their financial institutions for a potentially renewable period of 180 days.”

President Barack Obama signed the national defense act, initiated by the U.S. Congress, last Dec. 31, under which U.S. financial institutions will sever ties with foreign financial institutions doing transactions with Iran’s central bank, the main settlement channel for Iran’s trade with foreign countries. In March, the U.S. exempted 10 European countries and Japan from the sanctions, which are to take effect on June 28.

Based on the same law, Washington launched sanctions on transactions of non-oil goods and services on Feb. 29, from which Korea has already been exempted. The non-oil sanctions are not applied to state-owned banks of foreign countries. In Korea, Woori Bank and the Industrial Bank of Korea, majority-owned by the government, have been settling Korea’s trades with Iran.

With the sanctions, the toughest ever directed at Iran, the U.S. is attempting to choke off revenues channeled into Iran’s nuclear programs.

According to Washington, Iran’s oil exports dropped by nearly a third from before the U.S. announced the sanctions.

“By reducing Iran’s oil sales, we are sending a decisive message to Iran’s leaders,” Clinton said in the statement. “Until they take concrete actions to satisfy the concerns of the international community, they will continue to face increasing isolation and pressure.”

Korea, which previously sourced nearly 10 percent of its oil imports from Iran, has reduced the amount after Washington requested it late last year. According to the Ministry of Knowledge Economy, Korea imported 34.13 million barrels of Iranian oil for use in the first six months of this year, down 7.5 million barrels, or 18.05 percent, from the same period last year.

The exemption from the sanctions is not indefinite. It will be effective for six months, and the countries will have to seek to renew it.

The Ministry of Foreign Affairs and Trade in Seoul said it will cooperate with the U.S. sanctions on Iran and decrease Iranian oil imports.

“We might have to decrease Iranian oil imports to zero if this six-month-long exemption procedure goes on,” said an official of the ministry. “Even if that happens, we will continue to join the international community’s campaign to dissuade Iran from developing nuclear programs.”

Iran has been suspected of having cooperated with North Korea on nuclear development. An official of the Ministry of Foreign Affairs and Trade working on the North Korea nuclear issue said Seoul’s cooperation with Iranian sanctions is not intended to disrupt North Korea’s nuclear program.

“There is no clear evidence of the North Korea-Iran connection, and our approach to the Iranian nuclear issue is consistent with that of the international community,” the official said.

Iran is scheduled to hold a third round of talks on its nuclear program with the U.S. and five other Western powers in Moscow on Monday and Tuesday.