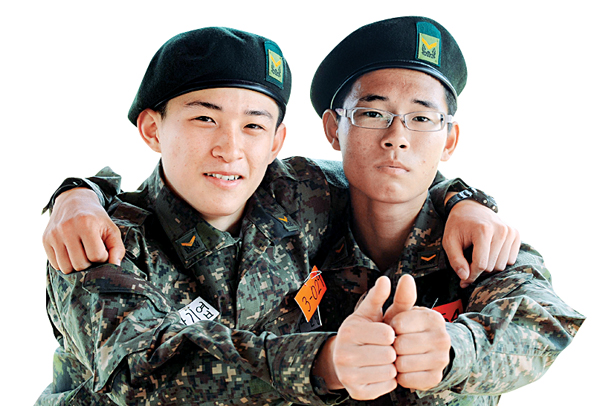 Han Ki-yeop, left, and Bae Joon-hyoung, right, will be commissioned as Army staff sergeants later this year, becoming the first multiethnic soldiers to become officers in the military, according to the Army. Provided by the Army


As Korea is slowly embracing its transformation into a multicultural society, two soldiers born of non-Korean mothers are poised to become Army officers later this year, according to the Army yesterday. It will be the first time ever for Korea to appoint soldiers from multicultural backgrounds to the rank of military officers.

For decades, this traditionally homogenous country banned those with a non-Korean parent from serving in the military, citing fears it would adversely impact military morale, but it has lowered the entry barrier over recent years.

The most recently revised military service law in 2009 has made it obligatory for those with multiethnic backgrounds, including those who come from interracial families, to serve in the Korean military.

The term “mixed-blood,” often used derogatorily to refer to those with a non-Korean parent, has also been removed from the language of the military law since last year.

The military also changed the terms used in an oath required of newly recruited soldiers and newly commissioned officers.

Previously, the oath mentioned minjok, or people of Korea, as a target of their pledged allegiance. But, because minjok implies only the Korean race, it was replaced by gukmin, another word meaning people of the country, in April of last year.

There are 193 rank-and-file soldiers with multiethnic backgrounds in Korea, 179 in the Army, nine in the Air Force and five in the Navy, according to the Ministry of National Defense.

Bae, whose mother is Vietnamese, said that he wanted to become a soldier after watching soldiers in Korean dramas when he was a child, according to the Army. Bae, from Sangju, North Gyeongsang, applied to be a military officer right after graduating from high school.

Han, born of a Japanese mother, has eight vocational licenses he acquired when attending a commercial high school in his hometown of Jangheung, South Jeolla.
“I was thinking hard as to how to make use of the licenses that I worked so hard to earn and I thought about serving in the military,” Han was quoted as saying in an Army publication.

The two soldiers both hoped that they could give the first salary they received as staff sergeants to their mothers, so that their mothers could visit their own homelands. Another hope, they said, was to be officers respected by rank-and-file soldiers.

As the number of soldiers with multicultural backgrounds is on the rise, the Army, the largest of the Korean military branches, said it is coming up with supportive measures for them.