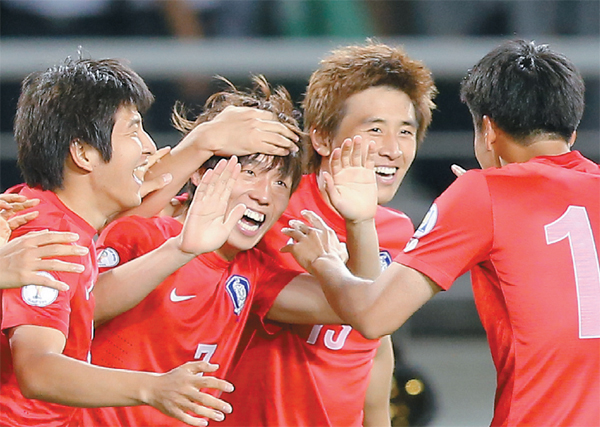 Kim Bo-kyung, second from left, is congratulated by teammates after scoring his second goal against Lebanon in the final round Asian qualifiers for the 2014 FIFA World Cup in Goyang, Gyeonggi. Korea won 3-0. By Kim Min-gyu


When Manchester United midfielder Park Ji-sung announced his retirement from the national football team last year after the Asian Cup, the 31-year-old was asked to pick who would be his successor. While media and fans had their own opinions on who is the right candidate, the former national captain pointed to Cerezo Osaka midfielder Kim Bo-kyung.

Since then, Kim often was compared with Park. Both had similar football playing styles - creating spaces in the midfield with energetic runs - and both wore the number seven jersey on the national team.

While playing on the Olympic team and senior national team, Kim lived up to his reputation as the “next Park Ji-sung.” In the final round Asian qualifiers for the 2014 FIFA World Cup, Kim contributed two assists in Korea’s 4-1 win over Qatar last week.

But even with his promising performance in the Middle East, Kim said after the national team training on Sunday that he still felt bad because he didn’t score a goal. Since his national team debut in 2010, he had yet to score.

For Korea’s second qualifier against Lebanon, a determined Kim told reporters that he now prepares for qualifiers with the intention of bagging a goal.
The midfielder wasn’t on the pitch when the Taegeuk Warriors were beaten 2-1 by Lebanon last November, but he knew the rematch’s importance.

On Tuesday, Kim saw his name on the scoreboard twice as Korea blanked Lebanon 3-0 in its Asian qualifier for the World Cup in Goyang, Gyeonggi.

Unlike the Qatar match, where he played in the left flank, Kim started as right winger, but his movements were making impressions in almost every part of the pitch, while taking charge of set plays with his accurate left foot.

The team wasn’t having an easy time penetrating Lebanon’s packed defense, but Kim didn’t miss his first chance to score. In the 29th minute, he received Lee Keun-ho’s pass and fired into the net with the left foot, kicking away the burden of being scoreless for those 14 international team matches.

Riding high on a boost of confidence, Kim didn’t stop there.

Two minutes into the second half, Kim dribbled nearly 20 meters after receiving a pass from Yeom Ki-hun and again slotted the ball into Lebanon’s net.
Heating up the 36,756 fans in attendance, Koo Ja-cheol sealed the victory with his team’s third goal in the 89th minute.

For Kim, it was a mission accomplished in a big way, ending his international goal drought and helping to lift Korea to the top of the Group A of the Asian qualifier standings.

“I’m really happy that I got my international debut goal,” Kim said after the match. “Coach asked me to move around more and I was in good condition to play.”

The 178-centimter-tall player has seven goals in 12 J-League matches with his team Cerezo Osaka. And with a strong international performance, it looks as if Kim is cementing his nickname “next Park Ji-sung.” Yet the footballer is well aware that there’s still a long road ahead.

“It feels good when I hear that people are saying I’m the next Park Ji-sung,” Kim said. “But I see that comment as people’s encouragement for me to perform well. And I know I have to grow up more.”

Korea, led by coach Choi Kang-hee, will not have another qualifying match until September 11, when it travels to face Uzbekistan. But for Kim, playing in his nation’s team jersey will likely continue as he readies himself for the London Olympics.

“I’ve been with the Olympic team for a long time and it gives special meaning to me,” Kim said. “I want to be at the Olympics and play without a regret.”