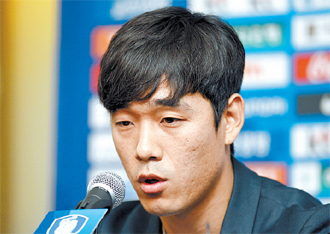 Park Chu-young speaks about military issues during his press conference in the lobby of the Korea Football Association headquarters in Seoul, yesterday. [YONHAP]

Arsenal striker Park Chu-young finally apologized for his reclusive behavior and promised he would carry out his military service, saying he never thought about dodging it.

In the lobby of the Korea Football Association headquarters in Seoul yesterday, Park held a press conference and explained his military issues. The 27-year-old insisted he had no intention of emigrating or avoiding military service.

“I know there’s has been lot of controversy regarding my military problem and I want to say I an sorry that I gave such concern to people,” Park said, reading from a prepared statement.

“I wrote a letter of pledge to the Military Manpower Administration and I will definitely do my military service.”

Park, who has scored 24 goals in 58 matches for Korea, has been under fire since March after it was revealed that the former national team captain could postpone his military service until age 37 because he received a 10-year residency status from Monaco, the sovereign city-state on the French Riviera. Park played three years for AS Monaco before moving to Arsenal last summer.

The move wasn’t illegal because the MMA approved it, but many people perceived it as taking advantage of a loophole in the current law.

According to the Korean conscription law, if Park decides to return to Korea after age 37, he would be categorized in the Second Citizen Service and could be called up only in the event of war. This technically means he could avoid his military duty if he chose to do so.

Park explained that the reason he obtained his residency card from Monaco was not to avoid his military service, but to benefit his football career.

“When I was playing for AS Monaco, I learned lot of good things about ball, so I just wanted to stay in Europe to know more about football,” Park said.
The Gunners striker also came under criticism for hiding from the media and even from the KFA since the controversy erupted. Before the final round Asian qualifiers for the 2014 FIFA World Cup start, national team coach Choi Kang-hee asked Park to hold a press conference when he arrived to clarify the issue, but instead of doing so, he vanished.

While he was out of contact for almost a month, Park was omitted from the national team squad for Qatar and Lebanon. The footballer took responsibility for his disappeance, saying it was inappropriate, but that he needed time to think about his situation.

“When I was returning to Korea, I felt so sorry to my fans and my thoughts weren’t organized at that time,” Park said. “National team selection is the right of the coach and I didn’t want to bother the coach by having a press conference back then.”

At the press conference, Olympic football team coach Hong Myung-bo sat next to Park. After wrapping up a friendly against Syria with a 3-1 victory, the 43-year-old coach is currently in the process of selecting his 18-man squad for the London Olympics this summer.

Hong, who is expected to announce his final squad next week, didn’t specifically say that Park would be on his roster - but after the coach’s appearance at yesterday’s press conference, many are speculating that Park will play in London.

In fact, Park has been widely tabbed as the wild card (players over the age of 23) candidate for Hong’s team since he is familiar with the coaching staff and players after playing with them in the Asian Games.

“I really had a good time playing with the coach and players within the Olympic team,” Park said. “If I can play with them, I think I can deliver some happiness to fans as well.”

According to Korean law, male athletes who get a medal in the Olympics can waive their military duty. But Park said he isn’t thinking about that, but rather he is concentrating on getting into match shape.

The former FC Seoul player had little playing time with the North London club, appearing in only one league match.

“I’m not thinking about a medal, but about playing harder with my teammates and performing well in the Olympics,” said Park, who left for Japan after the press conference to train. “I think the Olympic team staff will help me to build up my form.”