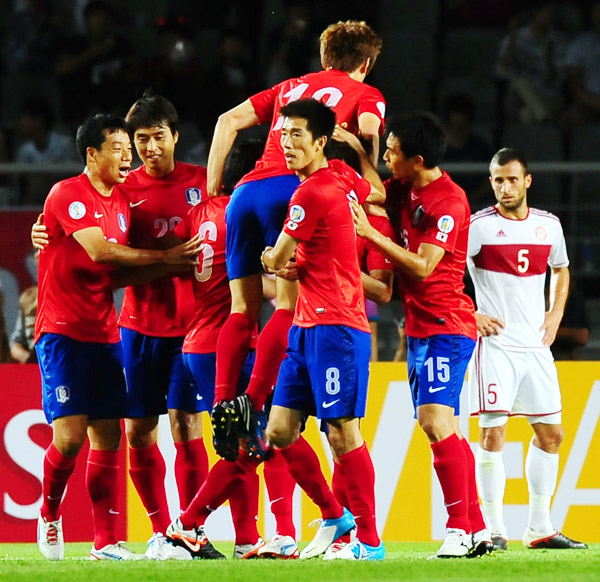 Korea national football team players celebrate after scoring a goal against Lebanon during their final round Asian qualifiers for the 2014 FIFA World Cup yesterday in Goyang, Gyeonggi. Korea won 3-0. [YONHAP]


Kim Bo-kyung scored twice to lift Korea to 3-0 victory over Lebanon yesterday in the team’s final round Asian qualifier for the 2014 FIFA World Cup. The win put the Taegeuk Warriors at the top of the Group A standings.

Kim, 22, scored the opening goal in the 29th minute and doubled the lead just two minutes into the second half. Augusburg midfielder Koo Ja-cheol sealed the victory with Korea’s third goal in the 89th minute.
After beating Qatar 4-1 last week, Korea has a perfect 2-0 record in Group A. In second place is Iran, with a win and a draw.
With 36,756 fans packed at Goyang Stadium in Goyang, Gyeonggi, Korea was aggressive from the start as the team looked eager to avenge its 2-1 defeat against Lebanon in the third round Asian qualifiers last November.

While coping with Lebanon’s counterattack, Kim, who is dubbed “the next Park Ji-sung” by fans, put the hosts on the board after receiving Lee Keun-ho’s pass from right flank and firing with his left foot to beat goalkeeper Ziad el-Samad.
It was Kim’s first goal in 14 international matches, and he didn’t stop there. Early in the second half, he dribbled nearly 20 meters after receiving a pass from Yeom Ki-hun and again put the ball into Lebanon’s net.

With the pace leaning to Korea, Koo landed the knockout blow with his left foot for the 3-0 victory.
“It was a difficult schedule, but I’m very happy that we started the campaign with two consecutive victories,” national coach Choi Kang-hee said after the match.
Korea, 35th in the FIFA rankings, next will travel to meet Uzbekistan on Sept. 11.