“Approaching: Choreography Engineered in Never-Past Tense,” 2012, by Haegue Yang is installed at Kassel Central Station as part of the dOCUMENTA international art exhibition in the German city of Kassel. Provided by the artist and Kukje Gallery

It is the first time in two decades that a Korean artist has participated in the exhibition, which has been held every five years since 1955 in Kassel, Germany. Korean installation artist Yook Keun-byung participated in dOCUMENTA in 1992. This year’s show started last Saturday and is scheduled to run through Sept. 16.

Haegue Yang, a conceptual artist based in Seoul and Berlin, is presenting two projects within dOCUMENTA. One is a large-scale, 45-meter-long (147-foot-long) installation work that consists of block venetian blinds programmed to automatically move, titled “Approaching: Choreography Engineered in Never-Past Tense.” Installed in an abandoned freight terminal (Guterbahnhof) at the Kassel Central Station, “the mechanical, yet fluent, movements of the blinds are reminiscent of the dynamism of trains, which are the symbol of industrialization, as well as of ‘mass games’ or military arrays in a totalitarian culture,” Kukje Gallery, which represent the artist, said in a press release.

Yang, whose name became widely known when he represented the Korean Pavilion at the 2009 Venice Art Biennale, has articulated conceptual and philosophical stories relating to humanity and her personal memories through installation works of various materials. 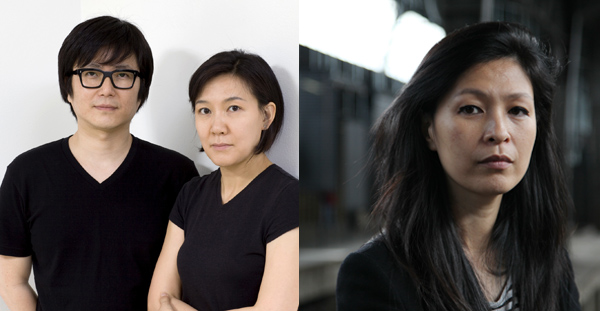 
Jeon and Moon, also known as influential contemporary artists in Korea, present their collaborative work, “News from Nowhere” at this exhibition in Kassel.
Their project “News from Nowhere” attempts to seek the roles and responsibilities of contemporary arts to the society and art’s future, according to Gallery Hyundai, who represents them. The project consists of a film, installation work and publication.

The film “El Fin del Mundo” shows the destructive environmental changes the world faces in the future and the subsequent end of art and birth of new art. It features famous Korean actors Lee Jung-jae and Lim Soo-jung.

a still from the 2012 film “El Fin del Mundo,” by Moon and Jeon. Provided by Gallery Hyundai


The installation “Vocie of Metanoia” features future architecture and clothes and other designs to make the case that the natural environment will change greatly. Japanese design group Takram, Japanese architect Toyo Ito, Korean fashion designer Jung Kuho and other designers have participated in the work.

The book “News from Nowhere” records the entire scope of the project as well as derivative discussions and discourses. The book includes interviews with various writers, artists and philosophers, including behavioral ecologist Choe Jae-chun, film director Lee Chang-dong and poet Ko Un.

Jeon has played a key role in introducing Korean contemporary art to the international art community. Using various national currencies, Jeon expressed a world of capitalism in which conflicts between social classes are frequent and people lose their ability to conform. One of his works, “The White House” (2005-2006) which makes a political critique by creating an image of the White House as insulated from the outside world, has come under the spotlight in the international art community.

Meanwhile, Carolyn Christov-Bakargiev, the festival’s artistic director, said she wants to broaden dOCUMENTA’s focus from the visual arts to culture at large, from quantum physics to historical artifacts.

A U.S.-born Italian-Bulgarian art historian with a distinctive mop of tightly curled golden hair, she dislikes categories and has frustrated some by providing no overarching concept for the exhibition, instead preferring a “holistic” approach. 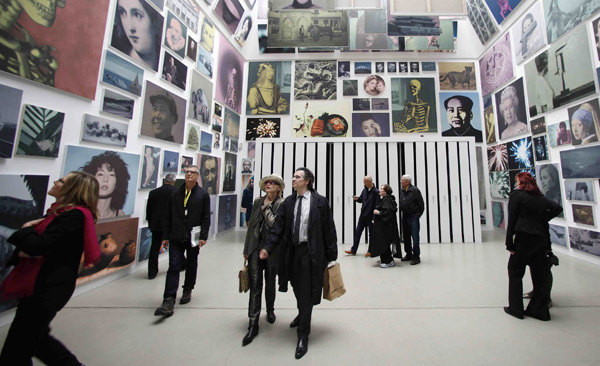 
“dOCUMENTA is dedicated to artistic research and forms of imagination that explore commitment, matter, things, embodiment,” said Christov-Bakargiev, during an academic lecture she gave instead of the traditional opening news conference.

One key theme that she said had emerged, however, was that of collapse and recovery, appropriate for a show created to revive both the visual arts in Germany and the city of Kassel, which was devastated during World War II.

Originally modest in size, dOCUMENTA’s budget is now about 25 million euros ($31 million) and artworks are shown throughout the city, in parks, museums, cinema and the train station, “like an exploded museum,” according to Christov-Bakargiev.

The festival is one of Europe’s top four exhibitions, alongside the Venice Biennale, Art Basel and Monumenta in Paris, and it takes pride in its avant -garde image. In 2007, China’s Ai Weiwei brought 1,001 compatriots to Kassel as “live exhibits.”

Reflecting the original ambition to reimagine and revive culture, the exhibition casts its light as far as the embattled Afghan capital of Kabul, where dOCUMENTA has a separate venue and series of seminars.

A work commissioned for dOCUMENTA draws parallels between the two towns. “A Brief History of Collapses” juxtaposes two films of Kassel’s 18th-century museum, the Fridericianum and Kabul’s Darulaman Palace.

Through other artworks, dOCUMENTA depicts Kabul not simply as a place of conflict but also as home to a rich cultural heritage and a potential hub of creativity “through acts of radical imagination.”

The ability to reimagine the world is a golden thread running throughout the exhibition and linking the work of artists with that of participating physicists, biologists, anthropologists and a hypnotherapist.

“The boundary between what is art and what is not becomes less important,” said Christov-Bakargiev.

Christov-Bakargiev, previously director of Turin’s contemporary art museum, has said she is not sure museums will continue to exist in their present form.
And dOCUMENTA sometimes feels more like a Wunderkammer, or room of marvels, than an art show.

This is epitomized by the “Brain,” a small space in the Fridericianum Museum that is jammed with objects, artworks and documents, and is a miniature puzzle of an exhibition that condenses and centers the thought lines of dOCUMENTA as a whole.

Sustainability and the relationship between nature and culture are also strong themes of the dOCUMENTA, which some have jokingly dubbed “dogumenta” due to its interest in dogs.

“Many think there is a difference between culture and nature but there really isn’t...It is important to gain a perspective on the world and on life that is not just human,” Christov-Bakargiev told Zeit Wissen, Berlin’s bi-monthly magazine, criticizing anthropocentric views.