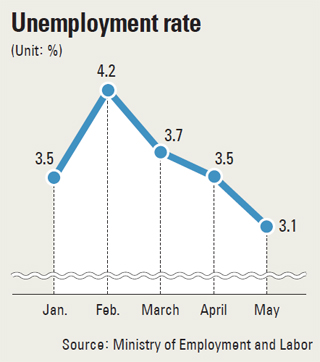 The jobless rate stood at 3.1 percent last month, down slightly from 3.2 percent a year earlier, according to the report by Statistics Korea. Last month’s tally also represents a drop from 3.5 percent in April.

Job creation accelerated with a total of 472,000 positions added to payrolls in May, compared with 355,000 a year earlier. The number is also an increase from 455,000 jobs created in April, and marks the eighth month in a row that more than 400,000 people joined the country’s work force.

The employment rate edged up 0.4 percentage points from the year before to 60.5 percent. In April, employment stood at 59.7 percent.
“There was a steady increase in positions created in the services sector centered around wholesale and retail, healthcare and welfare, and education-related areas that contributed to the overall improvement in the job market,” the agency said in its report.

Over 200,000 jobs were added in wholesale, retail, health and welfare last month, which helped offset losses in manufacturing and farming, areas where the number of new positions fell by 67,000 and 21,000, respectively, from April.

The economically active population came to just under 25.94 million, up 1.8 percent from the same month a year earlier, according to the report.
The latest job data comes as Asia’s fourth-largest economy grew 2.8 percent in the first quarter in the face of lingering euro zone concerns and sluggish growth in the United States and China. Korea grew 3.6 percent in 2011, with the government predicting similar growth this year.