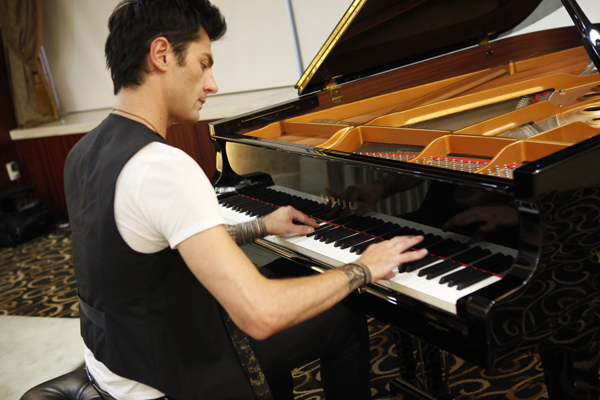 June 23: The Sejong Center for the Performing Arts will host a joint performance by Italian organist Pier Damiano Peretti and French organist and composer Jean-Baptiste Robin.

Peretti won first place at the St. Albans International Organ Competition in 1999 and since then has toured the world.

Since 2009, he has been a professor at the University of Music and Performing Arts in Vienna. Robin is regarded as the top student of notable French organist Marie-Claire Alain, who often performs substantial works from memory.

In 2000, Robin was appointed to the prestigious post of organist at Poitiers Cathedral and now is an organist at the Palace of Versailles.
The performance starts at 7:30 p.m.

July 6: Since 2004, Maksim Mrvica, a famous Croatian crossover pianist, has held concerts every year in Korea. Mrvic kicks off his “Maksim Mrvica Korea Tour” July 6 in Seoul, then moves on to Gwangju, Busan, Daejeon and Daegu.

Since making his first album “Gestures” in 2000, Mrvica has has performed in several genres. His dynamic piano playing accompanied by electric sound and a strong beat. His masterpiece “The Flight of the Bumble Bee” was highly acclaimed by critics who said, “His fingers are gifts from God.”

Aug. 19: Will the real Slim Shady please stand up? For the first time in Korea, he will. Eminem’s “Recovery Tour” makes its way to Seoul this summer after stops in the Americas and Europe. The U.S. rapper and producer was the best-selling artist of the 2000s, with his debut album “The Slim Shady LP” propelling him to fame in 1999. He became the first artist to win the three-consecutive Best Rap Album Grammys. Currently, more than 86.5 million copies of his albums have been sold worldwide.

To July 31: “Wicked” is a musical based on the Gregory Maguire’s best-seller novel, “Wicked: The Life and Times of the Wicked Witch of the West.” The original Broadway production of “Wicked” has been nominated for 11 Tony Awards, including Best Musical, Orchestrations, Costume Design and Scene Design. The long-running musical combines a sensational story and addictive music.

To Oct. 7: The Korean version of the musical “Chicago” returns to the stage after a two-year absence with a new cast. “Chicago” tells the story of the “hottest stage in the world” in the roaring ’20s, when the country was in the throes of a new kind of music - jazz.

To August 5: The 1960s youthful spirit rises again with cheerful and awakening musical numbers and dancing in “Hairspray.” Its premiere in 2007 was extraordinary.

Winning the 14th Best Foreign Musical and Actress awards at the Korea Musical Awards, “Hairspray” was highly acclaimed for its quality and popularity.
Performances start at 8 p.m. on weekdays; at 3 p.m. and 7:30 p.m. on Saturdays; at 2 p.m. and 6:30 p.m. on Sundays.

Tomorrow: The Korea National Ballet is bringing back its contemporary production of “Romeo and Juliet,” choreographed by Jean-Christophe Maillot, as the opening performance for the upcoming Ballet Festival Korea.

In October, when the KNB performed “Romeo and Juliet,” accompanied by the Seoul Philharmonic Orchestra under the baton of maestro Chung Myung-whun, an average of 98 percent of the seats were occupied during the four-day run. The upcoming show, however, will use recorded music.

Jo joined the Washington Ballet, where she was a premiere danseuse. “Shaking the Mold” concerns people searching for answers to their questions of life.
The performance starts at 8 p.m. on June 15 and at 6 p.m June 16.

Saturday and Sunday: Korean ballerina Kang Sue-jin, a principal dancer in Germany’s Stuttgart Ballet, will perform the iconic ballet “La Dame aux Camelias” by John Neumeier. Kang will be in the lead role of Marguerite Gautier, a tragic courtesan in 19th-century Paris.

The prima ballerina joined the Stuttgart Ballet in 1986 and was the first Asian to be honored as a chamber dancer by the German state government of Baden-Wurttemberg.

July 10 to July 28: Musical “Mozart” makes its way to Korea. In 2010, on its first performance in Korea, all 3,000 seats were sold out. Now with Korean actors, “Mozart” aims to show more than its original work with some 500 splendor costumes and an orchestra.

To June 27: The word “jami” means “delicious food that is also nutritious,” as well as “fun” in the dialect of Jeju Island. Admission includes a selection of Korean dishes and traditional tea.

Performances are at noon Monday, Tuesday and and Wednesday.


* Event information is culled from the Korea Tourism Organization and other online sources.