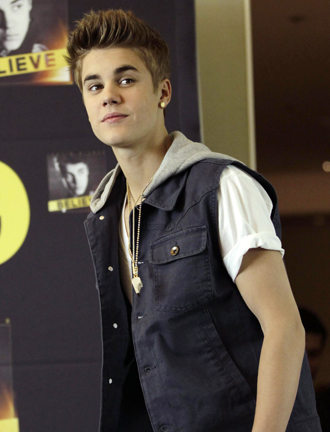 Bieber’s teenage fans, known as “Beliebers,” went wild when the 18-year-old took to the stage Monday with a troupe of dancers, an impressive lights show and his signature bright sneakers.

Some die-hard “Beliebers” had camped out for days in central Mexico City to ensure prime positions at the mega- concert. Mexican authorities enforced tight security, looking to avoid the kind of stampede that injured more than 40 young Bieber fans at a free show last month in Oslo.

Bieber, who was discovered on YouTube in 2008, has adopted a more edgy image and sound on his new album than the catchy pop tunes that first made him a teen idol.

But the singer told a news conference ahead of his Mexico City show that “being 18, I feel like I do have a responsibility to be a good role model.”
“I’m not perfect, but at the end of the day I always want to send a message. ... Everybody, no matter being young or old, can always use a positive message; that’s why I named my album ‘Believe,’” he said.