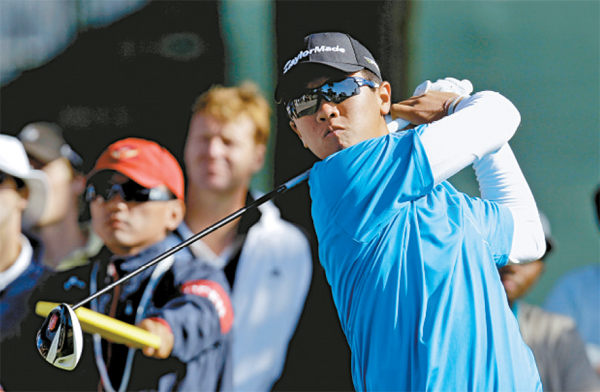 Andy Zhang hits a shot during a practice round for the U.S. Open. The 14-year-old’s father returned to China thinking he wouldn’t be playing. [AP/YONHAP]


SAN FRANCISCO - The march of technology and the global growth of golf will mean that 14-year-olds, like China prodigy Andy Zhang, may become commonplace in the next few years, according to Tiger Woods.

The Beijing-born but Florida-based Zhang made history at this year’s U.S. Open at San Francisco’s Olympic Club even before the tournament got underway.

Having narrowly failed to qualify for the year’s second major, Zhang found himself propelled into the tournament due to last minute entry adjustments and withdrawals.

At 14 years and six months when he tees off in Thursday’s opening round, Zhang will be what U.S. Golf Association officials believe is the youngest player in U.S. Open history and certainly the youngest since World War II.

Tadd Fujikawa, who was 15 at the 2006 U.S. Open at Winged Foot, is the youngest modern era player.

Asked for his reaction to competing against such a young player, Tiger Woods said that technological advances were playing a key role.

“These kids are now bringing out iPads to the range and watching their swing and breaking it down on the V1 [video analysis software],” he said. Kids are now being introduced when they first start.

“I saw a few of these kids over in Korea who’ve only been playing the game for a year.

“That’s the new generation. The swings are all going to look very similar, and all these kids are going to have power.”

Zhang has lived in the United States since he was 10, having taken up golf at six, and attends the IMG Golf Academy in Florida.

Zhang will have some family support in San Francisco as his mother is with him. His father, however, returned to China at the weekend expecting his son to remain a reserve.

Asked what advice he could hand out to Zhang, Rory McIlroy, a teenage prodigy himself when he turned pro at 18, found it hard to reply.

“When I was 14, I was getting prepared to play in my club championship, not the U.S. Open, so I’m not sure I could give him any words of wisdom,” he said.
“Just got to go out there and enjoy it. It’s an unbelievable experience for someone so young.”