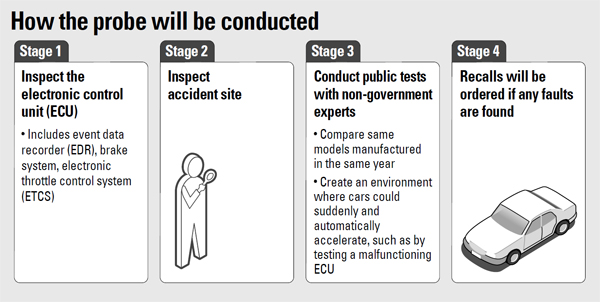 The driver claimed the car suddenly and uncontrollably accelerated, and denied that the accident was a result of his lack of inexperience or poor driving.

Later that same month, an SM3 patrol vehicle in Jeju suddenly made a loud noise during a checkup on drunk driving, before veering into a taxi and then a wall. Again, the accident raised questions about who was at fault and why.

The recent spike in accidents blamed on cars speeding up without being instructed to prompted the government to launch a joint investigation with automotive experts and civic groups into whether cars’ electronic controls really are malfunctioning on a growing scale.

Additionally, as more drivers are installing black boxes in their vehicles, vivid images of the crashes are becoming more readily available and ramping up fears.

The first meeting of the joint investigation team took place on May 25 and discussed the time frame for the probe, what methods will be employed and what incidents reviewed.

The ministry said it will look into six incidents over the last 18 months. However, only half of the vehicle owners in the six cases have agreed to fully disclose the entire investigation process.
The results will be made public next month.

“We have decided to publicly disclose the entire investigation process to the press in order to secure the credibility of the investigation,” an official of the Ministry of Land, Transport and Maritime Affairs said.

The team will also look a further 32 accidents later this year and announce the results in October.
Investigators will also for the first time disclose the contents of the vehicles’ event data recorders (EDRs).

Very much like an aircraft’s black box, the EDR keeps a five-second record of the car’s control systems during an accident.

Accidents caused by sudden automatic acceleration have always courted controversy, not only in Korea but also across the globe.

Especially in recent years, the number of claims for accidents of this type has been growing rapidly as automobiles install more electronics parts.

The electronic control unit holds the key. Of the roughly 30,000 parts installed when assembling a vehicle, 20 to 30 percent are electronics.

Like personal computers, they are supposed to work perfectly, but in reality there is a risk of them malfunctioning.

Highlighting one of the potential risks, none of the accidents blamed on independent acceleration have taken place at the wheel of a vehicle with manual transmission.

Until now, Korea’s traffic law has put the onus on the automobile owner to show their innocence by proving that the car malfunctioned - an almost impossible task for most laymen.

In fact, the job is so tricky that critics are skeptical whether the new probe will turn up much evidence of substance.

Although reports of defective vehicles causing accidents have abounded since the 1980s in Korea, none blamed on automatic acceleration have ever enjoyed success at court.

Automobile manufacturers have never lost a case or acknowledged there were defects that caused the vehicles to accelerate suddenly.

The car makers insisted that in most cases it was the driver’s fault.
In 1989, the U.S. National Highway Traffic Safety Administration (NHTSA) released a ”Sudden Acceleration Report,” showing that, in most cases, the accident was the result of driver error.

The study started three years earlier and examined 10 models that were reported to have an “above-average” rate of accidents.

In the mid-1980s, Audi faced a huge public outcry after its 5000 model was cited in six deaths and 700 accidents related to claims of abrupt and uninstructed acceleration.

The German auto maker responded by claiming the accidents were a result of drivers placing their feet on the wrong pedal, and the NHTSA backed up their argument.

Even a U.S. probe of Toyota found no defective parts that could cause the cars to accelerate randomly after Toyota was ordered to recall its vehicles made between 2009 and 2010.

According to the NHTSA, there were around 3,000 reported accidents of this nature involving Toyota cars sold in the U.S. from 2001 to 2010. Together, they claimed the lives of 93 people.