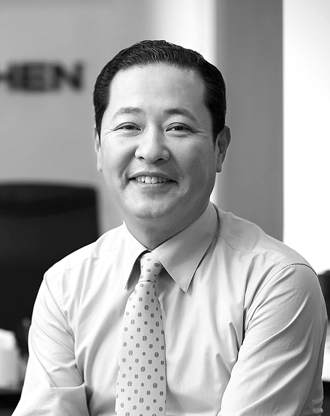 Olympus, Japan’s leading camera maker, dismissed its Korea CEO Bang Il-seok earlier this month and has been inspecting the books of the Korean unit for evidence of embezzlement, industry sources said.

According to sources, Bang was asked to hand over his corporate credit card, cell phone and car to Japanese executives who were dispatched from Olympus headquarters in Japan on June 5.

The internal audit is being conducted in conjunction with the Bae, Kim & Lee law firm.
Although Olympus Korea yesterday confirmed to the Korea JoongAng Daily that Bang was sacked, it refused to give further details.

“Bang was officially fired on June 5 and he was also barred from entering his office as he was asked to return his security pass,” said an official at Olympus Korea. “It’s true that audit inspectors from headquarters are currently investigating the matter. All matters will be disclosed after the internal audit is completed.”
The post of Olympus Korea CEO is now vacant, but the spokesman emphasized that operations are unaffected.

“Olympus headquarters will appoint its Korean unit CEO as soon as possible although the date hasn’t fixed yet,” the spokesman said.

Olympus Chair and President Tsuyoshi Kikukawa resigned in October after major accounting irregularities and illegal payments were exposed by the company’s British former chief executive
Michael Woodford. It was one of the biggest corporate scandals in Japan in decades.

Bang Il-seok, 49, used to work for Samsung Electronics in Japan before joining Olympus Korea in 2001 when the Japanese camera maker started its Korean operation.

Industry observers said Bang increased his workforce from five to over 400 employees. He also raised the company’s market share from a mere 2 percent when he began to a peak of 30 percent in 2004, knocking out formidable rivals such as Sony, Canon and Nikon.

Olympus Korea is now a medium-sized enterprise with 177 billion won ($151 million) in sales in 2011 and 25.7 billion won in operating profits.

An attorney at Barun Law who is defending Bang was not available to comment.

Media reports Tuesday said Bang has flatly denied all allegations and will take the matter to a local court.