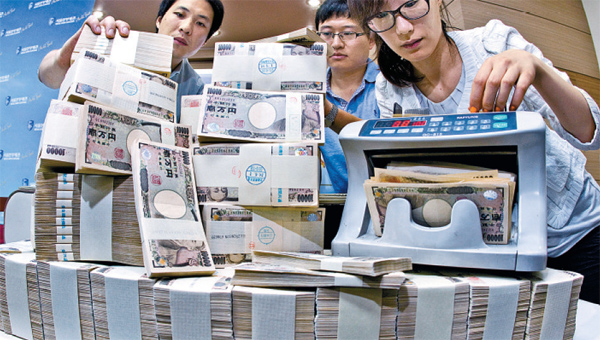 
On May 8 at Incheon International Airport, a Japanese man arriving from Osaka passed through an arrival gate then handed over two carry-on suitcases to a 44-year-old man surnamed Lee and his employee before disappearing. The two immediately went to the airport parking lot and loaded the luggage.

As soon as Lee carried the luggage inside his office in Myeong-dong, central Seoul, the five officials of the KCS entered the office and confiscated the suitcases.

The suitcases were filled with a total of 320 million Japanese yen ($4.02 million) in notes.

The customs service said on Tuesday that it exposed an illegal foreign currency exchange ring and booked eight members, including Lee and an exchange broker surnamed Kang, 57, the main culprits, without detention.

It said that they have traded 1.4 trillion won ($1.2 billion) worth of foreign currency illegally since 2007. It is the largest case undertaken by the authority since the KCS was established. The customs service also put two Japanese men who carried cash into Korea on the wanted list.

The KCS said that Lee, an owner of a shipping business in Dongdaemun, central Seoul, invented a “one-stop” illegal foreign currency exchange scheme to collect profit from exports with a few owners who export clothes to Japan since 2007.

It said that Lee exported clothing to Japan for sale and received payment in the form of Japanese cash brought over by the bagmen that would then be exchanged into Korean won.

The customs service said that the Japanese men have visited Korea about 200 times. The Japanese evaded the KCS’s surveillance by reporting the cash as investment money to customs at the airport.

It said that both exporters in Korea and importers in Japan benefited by evading taxes by not reporting their transactions. The customs service said Lee received 3.9 billion won in commissions from both Korean and Japanese clothing store operators in the last five years.

The profit collected from the exports in Japanese yen was exchanged into Korean won by Kang, an exchange broker in Myeong-dong.

Kang drew up documents necessary for foreign exchange and used dozens of copies of international travelers’ passports he acquired to disguise the exchange as for travelers.

Kang only changed $5,000 worth of yen to won in each exchange because foreign exchange exceeding $5,000 must be reported to the authorities.

The customs service said that it has been investigating Lee and Kang since January and was able to catch them after receiving information about the Japanese carrier’s arrival at Incheon from the National Intelligence Service.