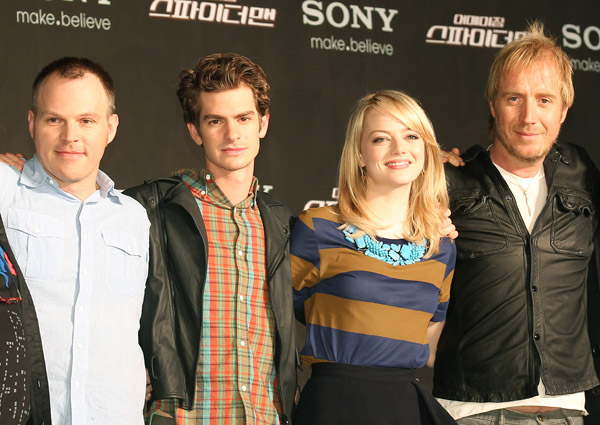 
Peter Parker’s journey of self-discovery comes to the screen this summer in “The Amazing Spider-Man,” the reboot film of the popular superhero franchise based on the Marvel Comics hero.

In advance of the opening of the film in Korea on June 28, director Marc Webb and stars Andrew Garfield, Emma Stone and Rhys Ifans, as well as producers Avi Arad and Matt Tolmach, were at the Ritz-Carlton Seoul yesterday to meet the press.

In the new film, a teenage Peter Parker (Andrew Garfield), perhaps one of the Marvel heroes who is easiest to relate to, struggles with rejection and loneliness stemming from his background as an orphan.

He begins to discover his super powers in high school. The film unfolds as Peter tries to find himself, his roots and his father, and in the process discovering a new love interest, Gwen Stacy (Emma Stone).

“I feel very close to Peter Parker. Peter’s an orphan and that was something that we all wanted to look at and deal with realistically in a psychological way,” said Garfield, who is best known for his role as Eduardo Saverin in “The Social Network” (2010).

“There is something beautiful about the journey of an orphan boy who has no sense of himself, searching for himself and his father, and in that search he finds that he is his own father and becomes a father to an entire city.”

Emma Stone, who plays Gwen, Parker’s love interest in the film, said her role was unlike any other female leads in the Spider-Man series.

“She is the total opposite of MJ [Mary Jane Watson, Parker’s love interest in the previous three movies]. She is the oldest in her family, she has a big sense of responsibility, her father is in bed every day,” said Stone.

“She becomes Peter’s confidant and starts a relationship with Peter while she finds out who he is ... She is involved in the action, she helps to save the day and she doesn’t sit idly by. She becomes a partner.” 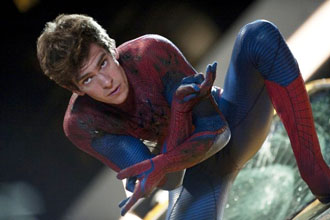 
The new film comes on the heels of the 50th anniversary of Spider-Man’s creation as a comic book super hero in “Amazing Fantasy” in 1962.

Producer Avi Arad said the new film is “unlike the previous movies” as it focuses on “the origin of Peter Parker.”
“I think the film has unique action. We were able to mix traditional action of CGI [computer-generated imagery] with amazing physical action that makes [the film] epic and unique,” said Arad.

The popular Spider-Man films that came before “The Amazing Spider-Man,” were directed by Sam Raimi and grossed a total of about $597 million in the U.S. and $2.5 billion worldwide.

Sony’s announcement of the new director, Marc Webb, who had made his directorial debut with the cult romantic hit “(500) Days of Summer” (2009), came as somewhat of a surprise to many fans.

The up-and-coming director said that in his own way, he wanted to try to create somewhat of a “character-based action.”
“I have always loved action movies and I made sort of the most non-action film of all time in ‘(500) Days of Summer,’ ” said the director, joking that he really just wanted to blow some stuff up.

Webb was asked if he felt he had enough creative control in making this film.

“[‘(500) Days of Summer’] was about small, intimate details between two people and finding private, personal moments that make love real and relatable,” said the director.

“I think with Spiderman, you have this massive spectacle with 3D and a lot of action, but you experience and believe in the action more if you care about the characters. The only way I know how to create an entity is through finding relatable characters and moments between them.”