Ballerina's reprise may be her Korean finale

Ballerina's reprise may be her Korean finale 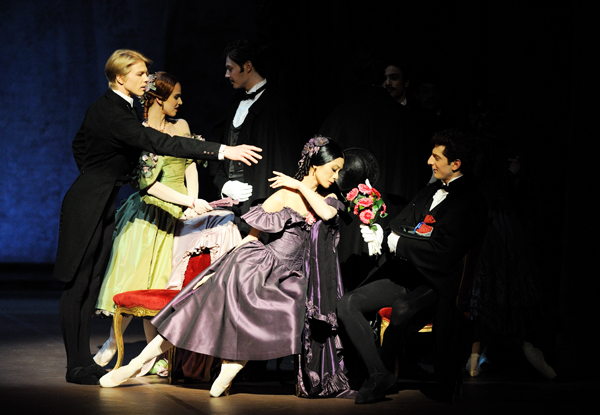 Stuttgart Ballet prima ballerina Kang Sue-jin dances the role of Marguerite in "The Lady of the Camellias." Kang will appear in the ballet tonight through Sunday at the Sejong Center for the Performing Arts in central Seoul. Provided by the Stuttgart Ballet


For internationally renowned prima ballerina Kang Sue-jin, the tragic heroine role of Marguerite Gautier in “The Lady of the Camellias” has been anything but a tragedy.

The role of Marguerite, a 19th century Parisian courtesan, earned her the prestigious Benois De La Danse prize dubbed the Oscar of ballet in 1999. Kang was the first Asian to win the prize.

Feeling "more attached to the character than ever before," Kang and her colleagues at Germany's Stuttgart Ballet will present “The Lady of the Camellias” tonight through Sunday in Seoul.

"I feel closer to the character of Marguerite now than 10 years ago when I played her in Seoul. I felt attached to the piece as soon as I took the first step during the first practice. I instantly felt attached to the music and the character," said Kang at a press conference Monday. "Not only the experience I had as a ballerina, but the experiences that I’ve learned in my life make me feel closer to the role."

For Korean ballet fans, Kang's performances are always must-see events. The Stuttgart Ballet's performance of “Romeo and Juliet” with Kang in Seoul in 2008 was sold out, not to mention “The Lady of the Camellias,” 10 years ago.

“Many dancers can learn the techniques or steps, but very few people can really dance,” said Reid Anderson, artistic director of the Stuttgart Ballet. “And Sue-jin can.”

“I’ve had great luck over the past years and worked with the greatest ballerinas around the world,” he said. “And we have the most famous one.”

“The Lady of the Camellias,” written by John Neumeier with music by Frederic Chopin, is also a meaningful piece for Marijn Rademaker, 31, who dances as Kang’s partner. It was this role that landed him a principal dancer position at the ballet in 2006.

“The happiest moment of my dancing career is when the artistic director, Reid Anderson, promoted me from soloist to principal right on the stage in front of the public after the premiere of ‘The Lady of the Camellias,’” said Rademaker. “I treasure every moment I dance with Sue-jin. She is very intuitive in her dancing and in her way of handling me as a partner. We just click.”

According to Rademaker, the way Kang expresses emotions through her body with the music is the ballerina’s greatest gift.

“Not many people are born with it. But Sue-jin is,” said Rademaker.

Although Kang announced that this production will likely be her finale in Korea, she’s not thinking of retiring at the moment.

“Of course I will retire someday and work in a position where I can help junior dancers. But I’m not thinking of retiring right now,” said Kang.

“I believe there are many doors in a ballet world that a retired dancer can open, such as becoming an instructor or a choreographer. When the time comes, I’ll open the door that I can put all my effort in.”

The Stuttgart Ballet will present “The Lady of the Camellias” at the Sejong Center for the Performing Arts, central Seoul, at 7:30 tonight and at 5 p.m. Saturday and Sunday. Tickets range from 50,000 to 250,000 won. For more information, call 1577-5266 or visit www.clubbalcony.com.