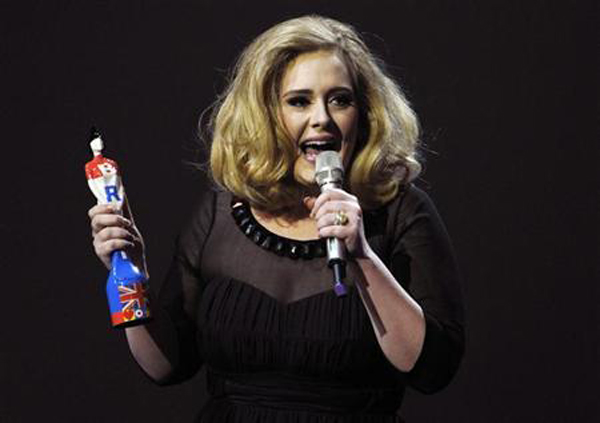 LOS ANGELES - British singer Adele regained her place at the top of the Billboard 200 album chart for the 24th time on Wednesday with her Grammy-winning album “21,” holding off new entries from Alan Jackson, The Beach Boys and Neil Young.

According to Nielsen SoundScan figures, Adele’s “21” sold 75,000 copies in its 68th week on the chart, buoyed by NBC’s special “Adele Live in London,” which aired June 3. The album has yet drop out of the top 10 since its U.S. release in February 2011.

The “Someone Like You” singer beat out debuts from three veterans of the music industry. Country crooner Alan Jackson debuted at No. 2 with “Thirty Miles West, selling 73,000 copies. It is Jackson’s 15th studio album, excluding holiday and compilation sets, and his 12th time in the top 10 of the Billboard album chart.

The Beach Boys made their highest debut since 1974, as their 29th studio album “That’s Why God Made The Radio” entered at No. 3, selling 61,000 copies in its first week and helping to kick off the band’s 50th anniversary celebration.

Newcomer rapper Big K.R.I.T. entered the chart at No. 5 with his debut album “Live From The Underground.