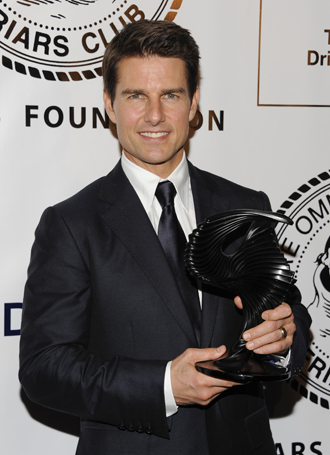 The actor received the fourth ever Friars Club Entertainment Icon Award on Tuesday night, placing him in the same company as Douglas Fairbanks, Cary Grant and Frank Sinatra.

Fresh off a whirlwind week of premieres for “Rock of Ages,” the actor, who turns 50 next month, said he’s amazed his career is still going so strong.

“After my first film I remember thinking I just wanted the opportunity to do it again... so to be doing this now; it’s kind of amazing to me,” he said on the red carpet.

Cruise had been slated to receive the award from Jerry Lewis, but the comedian was hospitalized overnight for low blood sugar.

Pollak, who appeared with Cruise in “A Few Good Men,” remembered being in awe of the “unusually large and perfect pen” Cruise used for marking his script. The actor soon had a pen sent to Pollak’s trailer, then sent him a second one when Pollak worried about losing the first.

Pollak still carries one of the pens with him and showed it off to the crowd.

Cruise said during his acceptance speech that his wife, actress Katie Holmes, was out of the country. But he did bring their 6-year-old daughter, Suri.

A few f-bombs were dropped, notably a barrage on film by Cruise during a highlight reel of his career, a reel that featured Cruise kissing Cameron Diaz, Renee Zellweger and other leading ladies.

Numerous plugs were worked in for “Rock of Ages,” coming out Friday. Baldwin co-stars with Cruise, and the ceremony included a performance by the cast of the Broadway musical on which the film is based.

From Manhattan, Cruise heads with his family to Iceland, where he’ll celebrate Father’s Day while filming “Oblivion.”