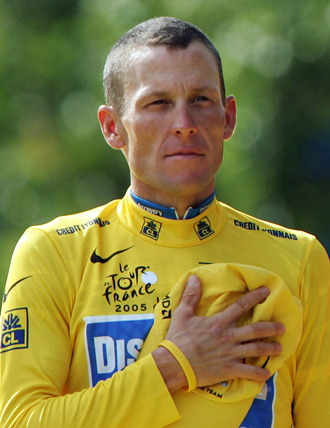 KWASHINGTON - Seven-time Tour de France champion Lance Armstrong confirmed Wednesday that he is facing new doping allegations brought by the U.S. Anti-Doping Agency (Usada) that could result in the stripping of his titles.

Armstrong - who has vehemently denied using performance-enhancing drugs - angrily said the new “baseless” charges stem from “discredited” allegations from the past.

“I have been notified that Usada... intends to again dredge up discredited allegations dating back more than 16 years to prevent me from competing as a triathlete and try and strip me of the seven Tour de France victories I earned,” Armstrong said in a statement. He slammed the agency as “an organization largely funded by taxpayer dollars but governed only by self-written rules.”

The Washington Post reported Wednesday that Usada had written to Armstrong saying blood samples taken from him in 2009 and 2010 that were “fully consistent with blood manipulation, including EPO use and/or blood transfusions.”

Usada chief executive Travis Tygart later issued a statement saying the agency could “confirm that written notice of allegations of anti-doping rule violations was sent yesterday to him [Armstrong] and to five additional individuals all formerly associated with the United States Postal Service professional cycling team.

According to the Post, the Usada claims it has witnesses to the fact that Armstrong and five former cycling team associates including Italian doctor Michele Ferrari and team manager Johan Bruyneel engaged in a doping conspiracy from 1998-2011.

Armstrong, however, said the witnesses cited by Usada were the same ones who spoke to federal investigators during a two-year probe that ended in February with no charges.

“These charges are baseless, motivated by spite and advanced through testimony bought and paid for by promises of anonymity and immunity,” Armstrong said.