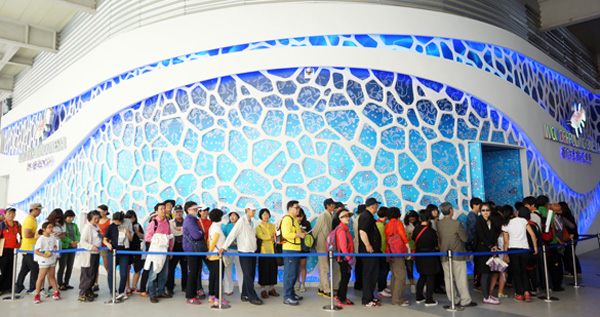 Vistors wait in line to enter the Indonesian Pavillion at Yeosu Expo 2012. Provided by the Organizing Committee for Expo 2012 Yeosu Korea


YEOSU, South Jeolla - Some 1.64 million people have visited the 2012 World Expo in Yeosu since it opened on May 12, but no one can say how many of them are not Korean.

Even though the central and regional governments have been drumming up the international exposition as a golden opportunity to attract more foreign investors to the southern coastal area, the expo’s organizing committee has not been collecting accurate data on foreign attendance.

“We only have information on how many tickets are reserved by people overseas,” said Kim Seung-ki, director of the committee’s communications team.

This lack of attention to detail may go some way in explaining why the project does not seem to be working, as people tied to the expo report only lukewarm interest from offshore investors. So far, most of the visitors have been local elderly people.

“[Whether] the expo is going to attract investment to this particular part of Korea, I’m afraid this will be difficult to figure out,” said Jesus Obregon, director at Accion Cultural, one of the organizers of the Spain Pavilion.

“Whenever we attend an expo, we ask ourselves what would be the added value [of investing here, but] all the Spanish companies that have shown an interest in Korea want to organize business meetings in Seoul, not in Yeosu.”

He said the 2010 Shanghai Expo, which was held on a grander scale in China’s financial capital and which ran for six instead of three months, proved a more fertile plain for arranging meet-and-greets between Chinese and Spanish companies. Being more developed, and with a burgeoning consumer market, Shanghai and indeed China were considered much less riskier than Yeosu, he added.

Minister of Knowledge Economy Hong Suk-woo said the expo was part of a larger branding exercise for the country that will later pay dividends, for example by boosting awareness of Korea’s strengths and inbound tourism, even if immediate business deals prove thin on the ground.

“The Expo is not entirely aimed at getting foreigners to invest in a particular area,” said Hong during his visit to the expo on Wednesday. “It is functioning more to draw attention to Korea overall.” 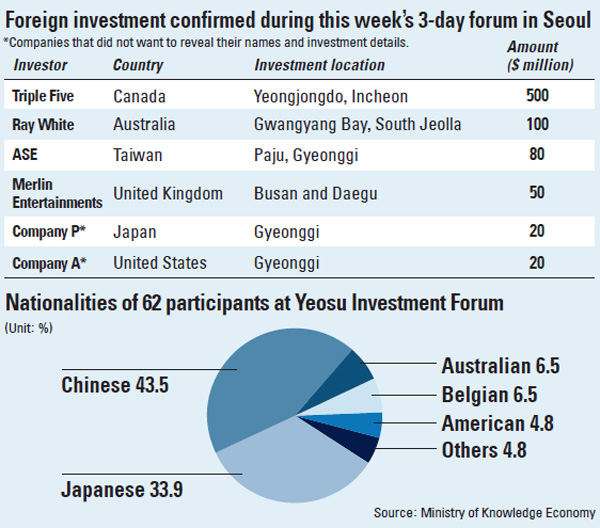 From Monday this week, the Korea Trade-Investment Promotion Agency (Kotra) held a three-day event in Seoul dubbed Foreign Investment Week (FIW) to lure investors, but failed to turn up even one tentative investment in the expo’s host city.

In total, $8 billion worth of new investment plans were confirmed from foreign parties, but just $1 billion of this is heading to the Gwangyang Bay area in South Jeolla, near Yeosu. The bulk of the remainder is centered on the Seoul National Capital Area, including Yeongjongdo in Incheon and Paju, Gyeonggi.

To shift foreign investors’ attention to other parts of the country, the Ministry of Knowledge Economy held a smaller investment forum in Yeosu on Wednesday in cooperation with Kotra. In contrast to the 362 foreign investors who showed up in Seoul this week, only 62 took part in the Yeosu event, mostly from China and Japan.

“What we are expecting here is that visiting foreign investors keep talking to their friends and contacts back home about the experience they had in Yeosu,” he said.

“As investors do their own homework to find the best place to put their money, it usually takes around three years for a city to actually see some results after an international event like this.
“And more they talk about it, the more investment offers Yeosu will get.”

About 40 percent of foreign investors listen to advice by Kotra and other local investment agencies on investing outside of the Seoul metropolitan area, according to Choi Mun-seok, director of Kotra’s investment planning team.

In its recommendations, Kotra has prioritized many cities with convenient transportation services or those that are well equipped with social infrastructure, such as the Gwangyang Bay Area or Jinhae in Busan. On this theme, Yeosu is now connected to Seoul by an express train KTX and highways.

“Until very recently, Yeosu was somewhat secluded, but the city branded its name with the expo and has put in place the necessary transport links and infrastructure to attract more investment,” said Choi. “Although we haven’t received any investment plans from foreigners for Yeosu yet, we are expecting follow-ups from 62 interested parties soon.”

Paul White, joint chairman of Australian real estate agency Ray White, decided to invest $100 million in the Gwangyang Bay Area. He opened a Seoul office last May to find a real estate market to further develop, and the southern coastal area of Gwangyang soon found its way onto his radar.

“I also heard about other [areas ripe for investment] after the Seoul office opened,” said White at the Yeosu Investment Forum.

Meanwhile, expo organizers remain in conflict with Japan regarding the use of the name Dokdo and the East Sea at certain facilities. Japan downsized a celebration of its national day at the expo earlier this month in protest.