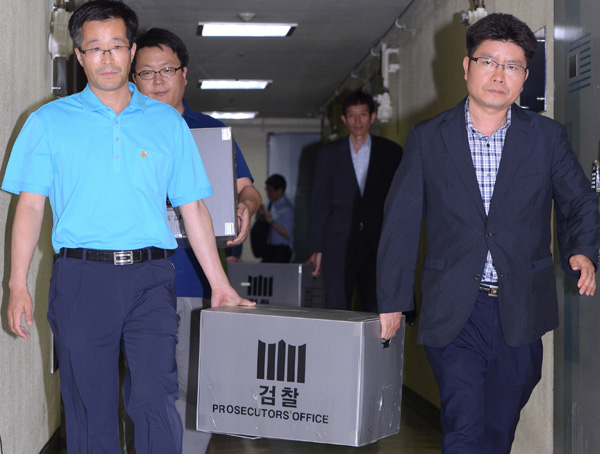 Investigators for the prosecution remove confiscated items from CN Communications in Yeouido, Seoul, yesterday after they raided the office of Lee Seok-gi, a proportional representative of the Unified Progressive Party, who has been under pressure to step down for a rigged primary last March. [Joint Press Corps]


Prosecutors yesterday raided the offices of Representative Lee Seok-gi, a Unified Progressive Party member who has been labeled pro-North Korea, on suspicions of election fraud.

About 10 prosecutors and investigators stormed Lee’s two offices ? at CN Communications, a consulting and marketing company, and the Social Trend Institute, an opinion survey organization ? and confiscated hard disks and account books.

In April 2011, Lee’s company, CN Communications, worked on a campaign for Chang Man-chai, who was running in a by-election for the position of South Jeolla’s education chief. The prosecution suspects that Lee cooked the accounts for Chang’s campaign and overcharged him.

Under the law, an election winner can be reimbursed for campaign expenses by the National Election Commission. Chang won the election and charged his expenses to the commission, including Lee’s fees.

The prosecution suspects that Lee asked for several million dollars.

Lee has come under fire for his pro-Pyongyang stance in dealing with North Korean affairs, publicly saying “the problem is not pro-North [politicians], but pro-U.S. [politicians].”

Lee is also one of the four UPP members who refused to forfeit the positions they won in a rigged proportional representative primary held by the party in March, despite the party leadership’s command to do so.

Lee’s company has worked for many liberal politicians’ election campaigns, including that of Kwak No-hyun, the Seoul education chief who was convicted in a bribery scandal. It manufactured campaign brochures, posters and banners.
It is suspected that 20 of the 51 liberal candidates who ran in the April 11 general election used Lee’s company for their campaigns.

On an investigation into the rigged UPP primary, the prosecution said that they have obtained two lists of the party’s 200,000 members and their personal information.

Suspicions are high that there were numerous “temporary members” or “ghost voters” in the primary, in which Lee, the de facto leader of the party’s main faction, won the largest number of votes.

Prosecutors said that they couldn’t find the roll of all voters in the primary, about 70,000 people, but they obtained a list of about 30,000 voters. They are currently comparing the 30,000 voters with the party’s roster in order to figure out whether any members cast ballots twice or if there were any unregistered voters.

They suspect that the information on the remaining 40,000 was deleted intentionally by some party members. They told reporters that they are considering raiding the headquarters of the UPP, an act which they attempted before but had to abandon when party members blocked them. They may otherwise demand the party leadership submit additional documents.