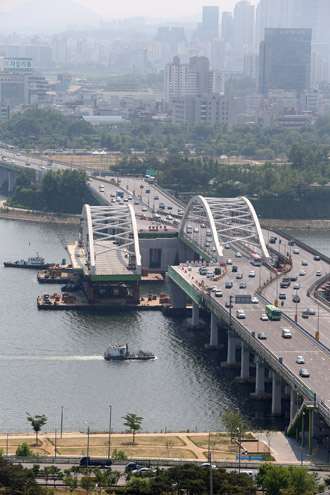 Workers prepare to assemble the 112-meter (367-foot) arch to complete the extension work of Yanghwa Bridge in Mapo District, northern Seoul, yesterday. The Seoul Metropolitan Government started the extension work as part of the West Sea Waterway Project in October last year. The project was launched by former Mayor Oh Se-hoon, but stopped by current Mayor Park Won-soon. The construction work recommenced due to safety concerns. The bridge is expected to be completed in mid-August. By Oh Jong-taek