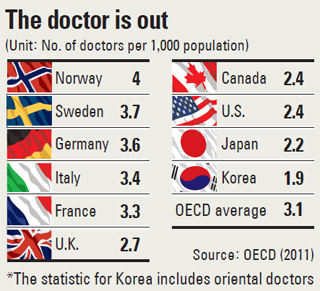 Korea has a shortage of doctors, especially in far-flung rural areas, and the government is finally planning to expand the number of medical licenses issued  the first time it’s discussed such a plan since it adopted a new medical system in 2000.

The Korean Medical Association has long opposed an increase because they don’t want more competition for jobs and private practices.

The JoongAng Ilbo confirmed yesterday that the Ministry of Health and Welfare invited last Tuesday three medical industry representatives  Lee Hye-yeon, director at the Korean Medical Association, Jung Young-ho, policy director at the Korean Hospital Association, and Kim Jin-hyun, professor of nursing at Seoul National University, who is also a member of the Citizens’ Coalition for Economic Justice  to discuss ways to nurture more doctors in Korea.

“Last week, we were able to gather opinions from experts representing each sector as well as a civic group on ways to have more doctors in medically vulnerable areas,” said an official from the Health Ministry yesterday. “We haven’t decided yet the scope of the expansion or when we’ll put the plan in force.”

The ministry is considering introducing a scholarship program for would-be doctors. After those students finish graduate school and pass the government’s medical exam, they will be sent to areas that lack medical services for five years. The ministry will meet with the three representatives next Thursday to hold further discussions.

The move comes as the total number of freshmen at 41 medical colleges has hovered around 3,000 per year for more than 10 years.

The Citizens’ Coalition for Economic Justice released a statement last week saying there should be a new medical college that can train more than 1,000 doctors every year who can work at national and public hospitals.

“The number of doctors per 1,000 people in Korea is 1.9, which is below the Organization of Economic Cooperation and Development’s average of 3.1,” said Jung Hyung-seon, professor of public health studies at Yonsei University. “The total number should be raised by 20 percent.”

In 2000, when the government introduced a new system that separated prescription and dispensing of drugs, doctors protested and the government promised a freeze in the number of doctors.

In areas like Goseong and Yangyang in Gangwon; Cheongwon in North Chungcheong; and Bonghwa in North Gyeongsang, there is only one doctor for every 1,000 people.