IAEA has plan in place to enter North: Nackaerts

IAEA has plan in place to enter North: Nackaerts 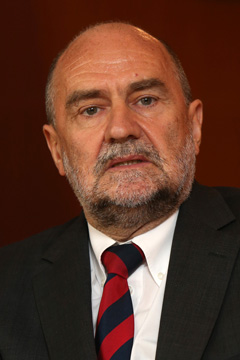 The International Atomic Energy Agency is ready to enter North Korea to evaluate the covert nuclear activities in the regime, according to a vice chief of the nuclear watchdog.

Herman Nackaerts, deputy director general of the Vienna-based agency, said the inspectors’ role and capacity in the North, however, will have to be clearly defined in advance to enhance the efficiency of the mission.

“We have a preparedness program in place in Vienna, where we have a team of inspectors who are being trained and follow the evolution in the DPRK as far as we can from Vienna, so they are prepared to go to the DPRK for verification and monitoring activities,” Nackaerts said in an interview with the Korea JoongAng Daily and the JoongAng Ilbo on Tuesday, referring to the North by the initials of its official name, Democratic People’s Republic of Korea.

At a board of governors’ meeting early this month, Yukiya Amano, the director general of IAEA, said there was no immediate prospect of the agency resuming its mission in the North.

The North invited the agency into the country’s Yongbyon nuclear site in March, after a three-year absence, as part of an agreement between Pyongyang and Washington in February. The agreement, which subjected the North to the suspension of nuclear and missile tests, was, however, scrapped after the North’s long-range missile launch on April 13.

The IAEA’s on-and-off activities at Yongbyon resumed under an agreement during the six-party talks on the North’s denuclearization in 2007, but the IAEA inspectors had to leave the site again in April 2009, when the North withdrew from the multinational talks.

“We have not been in the DPRK since April 2009, more than three years ago, and it is clear that in that period, our knowledge about the nuclear program in the DPRK has diminished,” said Nackaerts. Before the meeting, he met Lim Sung-nam, Seoul’s top envoy on the North’s nuclear program, and other senior officials of the Ministry of Foreign Affairs and Trade.

Nackaerts, who heads the agency’s safeguards department, said either through the six-party talks or through the United Nations Security Council, the mandate for the IAEA mission in the North will have to be clarified “on what we will have to do” and in what type of activities they will be involved.

The main purpose of his visit to South Korea was to participate in the Korea-IAEA Joint Review Meeting, which took place between Tuesday and yesterday in Jeju. The annual meeting, marking the 20th anniversary this year, is aimed at assessing the transparency of South Korea’s nuclear activities.

Last year, the IAEA performed about 800 inspection missions at nuclear sites or facilities that were using nuclear materials throughout the country. The IAEA inspectors could enhance the efficiency of their mission in the South under a new cooperation agreement between the agency and Seoul, signed at the Jeju meeting yesterday, according to the Ministry of Foreign Affairs and Trade.

“South Korea has been very cooperative with the agency, is very advanced in its nuclear fuel cycle, and has been providing excellent cooperation,” Nackaerts said.

Regarding Iran’s nuclear activities, the deputy director general said suspicion lingers regarding whether the activities in Iran’s nuclear sites are really for a peaceful purpose as Iran claims, and whether there is an undeclared facility.
Another round of talks between Iran and the P5+1 group of world powers are slated for next Monday in Moscow, and the prospect of any breakthroughs from the talks is slim, according to observers.