A jungle in there, but zoo commentators thrive

A jungle in there, but zoo commentators thrive 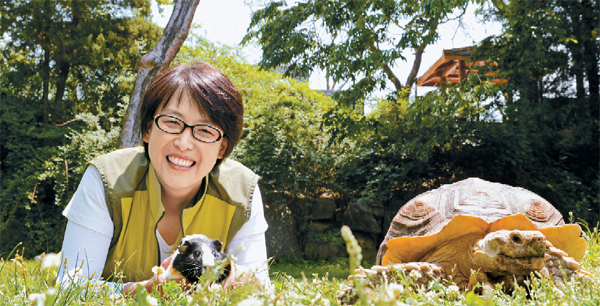 Homemaker Hwang Won-suk has been an “animal commentator” at the Seoul Grand Park Zoo since April. “I consider this job to be the last present from my late father,” she says. By Jang Jin-yeong


GWACHEON, Gyeonggi - First, the docents at art museums. Next, the commentators on cultural sites. Then, the guides in forests.

Koreans say “you see as much as you know,” the rough equivalent of the Western saying that “knowledge is power.”

So to help people “see” through what’s on the surface and enjoy visits and experiences to the fullest, these experts have emerged in Korea to expound on art, cultural sites and forests.

And now, Korea has its first commentators on zoo animals.

The Seoul Grand Park Zoo in Gwacheon, Gyeonggi, recruited the so-called “animal commentators” in January after the adoption of a five-day school week. The assumption was that the zoo would see an increase in young visitors.

The 44 guides who made it through the neck-and-neck competition started their jobs in April.

They offer information about animals at the zoo that visitors might not otherwise know: for instance, how one of the giraffes, named Zeus, lost one of his ossicones, the horn-like protuberances on his head. The reason: He was fighting with another male giraffe over a female.

The zoo guides are not snobby, hard-to-approach experts. Rather, they are full-time homemakers, retired married couples and gray-haired grandpas.

One common denominator among them is that they have a special place in their hearts for animals, and their new jobs as animal commentators have helped them start fresh chapters of their lives. 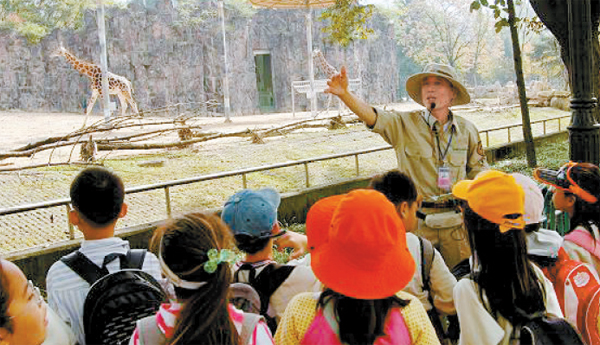 “If you compare the number of bones in a human’s neck with a giraffe’s neck, which would have more? In fact, both a human and a giraffe have seven neck bones. Isn’t that surprising?” Hwang Won-suk asks a group of excited youngsters gazing at the girraffes.

Hwang is a 46-year-old homemaker from Yangjae-dong, southern Seoul. But at Seoul Grand Park Zoo, she is much more than somebody’s wife and mother. She is the go-to-person when it comes to animals and why they are the way they are.

In fact, she says when she puts on the green vest with the Seoul Grand Park Zoo logo on it and a hat and enters the zoo, she actually feels like an explorer. Yet she brings with her the confidence of a person who knows exactly what he or she is doing.

Hwang has a special memory of Seoul Grand Park Zoo. About 30 years ago, when the zoo opened to the public, she held the hand of her father, who was a veterinarian, and visited for the first time.

Decades have passed, and Hwang’s father has died. But Hwang says she remembers that day vividly.

“I consider this job to be the last present from my late father,” she says. After all, she has turned from a homemaker with no particular skills to an expert on animals with first-hand knowledge that cannot be gathered from books.

She says she also wants her son - a ninth-grader - to learn the wisdom of life from animals, just like she did.

“Whenever I do my job, I think of my son. And that makes me motivated to pass on as much valuable knowledge as I can to the visitors to the zoo about the animals and their lives,” she says with a smile.
Eleven of the zoo’s commentators specialize in animals and six in insects, while the remaining 27 are responsible for classes targeting larger groups.

Though they share a love of animals, the commentators come from many different walks of life.

Park Eun-kyeong, 43, used to work as a tour guide. She once read a newspaper story about how watching moving animals helps brain development in children. Since then, she often took her son to zoos but felt the explanations offered there weren’t adequate. That prompted her to study up on the animals herself. 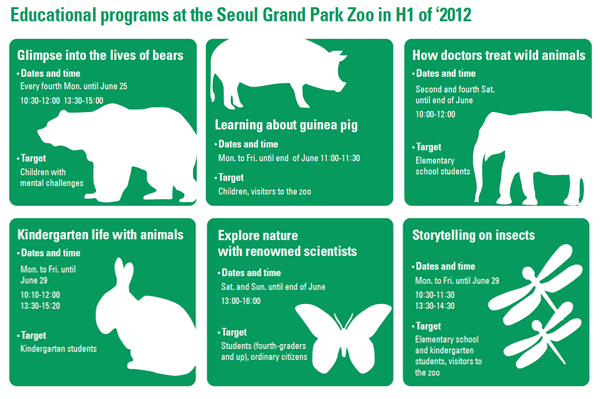 Also interesting is how many zoo commentators are in their 50s or older. But their age makes them no less passionate, active and diligent than their younger peers.

Many of them gather for study groups before or after work to further their knowledge, and they help out each outside their work hours, according to zoo officials.

Eun Jeong-nam, 71, is the oldest commentator, and he is in charge of the program targeting kindergarten students. “I feel young and energized being with animals and children,” he says. Eun was formerly an elementary school principal. “All my friends envy me and how I spend my retired years.”

There is also a retired married couple: Yun Seok-kwon, 69, and Lee Kyu-eun, 65. After Yun retired in 2005, he worked at the zoo as a volunteer. Taking pictures of the animals also became a hobby of his. Lee has been a volunteer since 2009.

“I couldn’t understand why my husband would buy such expensive cameras and wait for hours to take just one photo of an animal,” Lee says. “But working with him helped me understand and share his passion.”

Korean zoos have been harshly criticized for many years by animal rights activists for treatment of animals. Many are caged with little room to move, and their zoo habitats sometimes are nothing at all like their homes in nature.

That prompted some critics to argue that all Korean zoos should be closed for good.

But the Seoul Grand Park Zoo has been renovated to improve habitats to better simulate conditions in the wild.

While it’s unclear just how effective these new measures have been, zoo officials anticipate a dramatic increase in attendence as a result of the five-day school week and corresponding surge in the number of participants in its educational programs.

Last year, about 70,000 people took part in such programs. This year, the zoo expects the number to almost triple to about 200,000.

And that’s exactly what prompted the zoo to introduce the animal commentators program. They will work until December and get 60,000 won ($51.50) a day.

Kim Ae-ja, of the animal planning division at the zoo, remembers the overwhelming interest when the commentator program began. About 1,280 people applied for 44 positions available.

“During the recruitment process, we received so many calls,” she recalls. “So it’s no wonder that our animal commentators have huge pride in what they do.”

Kim also shared a fan letter from a youngster with uneven handwriting and a heartwarming message. “You taught us that once a horn of a giraffe is cut, it doesn’t grow back,” it reads.

She adds that some people call to ask when they can listen to a particular commentator.

“It seems the animals are hardly the only stars at our zoo now,” she says with a laugh. “So are the animal commentators.”