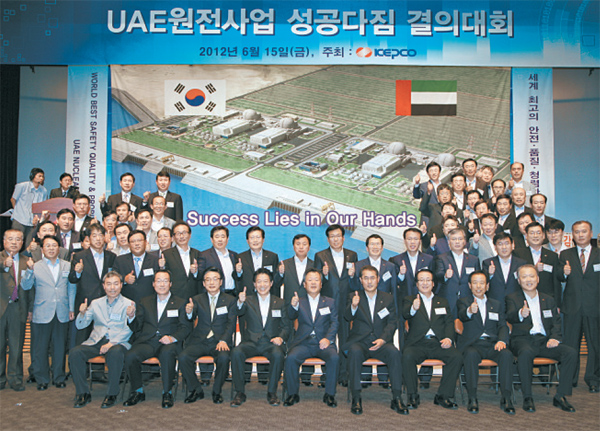 Kepco held a resolution rally for a successful UAE nuclear power plant project yesterday. At the rally, participants including President and CEO of Kepco Kim Joongkyum (fifth from left in front row) pose for a photo. Provided by the company


Korea Electric Power Corporation (Kepco) is looking for new items in the overseas market. As market growth has slowed down, Kepco’s strategy is to focus on the public sector in Korea and explore the world market to maximize its profit. For this, it has changed its management slogan to “New Area, New Contents.” It means it will locate new business in far regions where none have ever worked before, exploring new environments to find future projects.

When President and CEO Kim Joong-kyum was inaugurated in September 2011, he announced a “Two Track” management plan, saying, “Through efficiency and stabilization of the Korean energy supply, putting the public first, we will add to local economic development. Overseas, we will pursue profit through businesses such as nuclear power, water power, combustion power, electricity transmission, renewable energy and resource development.”

Results are already noticeable. Kepco has already succeeded in winning the world’s largest $800 million Jordan diesel power plant project. The contract and financing will be completed by August of this year and building will kick off shortly, with a deadline to open the power plant for commercial operation by March 2014.

Kepco’s results in Southeast Asia are also astonishing. In the Philippines, the Ilijan and SPC Power Corp. plants were constructed and last year it assembled a power plant in Cebu, taking 12 percent of the power generation market in the Philippines. Kepco is successfully conducting overseas business in not only the Philippines but in numerous other countries such as China, Mexico, Kazakhstan, and Australia in various fields like combustion generation, nuclear power, electricity transmission, renewable energy and resource development.

Kepco promised the world’s best nuclear power plant in all aspects, safety, quality, ethics and construction standards through its declaration for success. Kim used the Arabic saying, “Those who rule the well rule the people” to point out that “the Kepco subsidiary companies and cooperative company employees are companions digging a well in the desert of the Middle East. Please feel the heavy responsibility and sense of duty to create a second nuclear power plant construction order by completing this UAE project successfully. Please make sure to get rid of all the dangerous factors in advance and establish a thorough safety culture so the construction site can be a no-accident site.”

In addition he added, “Please work to fulfill all the conditions on the contract from equipment structure designing to purchase and construction so we can fulfill the demands of our client by setting up a global quality guarantee system and quality performance in preventive action.”