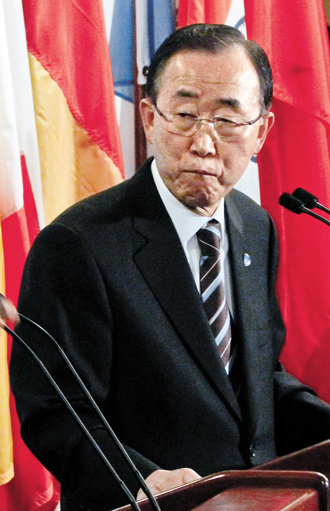 United Nations Secretary General Ban Ki-moon was named the 11th recipient of the Seoul Peace Prize, the third UN envoy but the first Korean to hold the honor in over 20 years since the establishment of the award.

The Seoul Peace Prize Cultural Foundation’s selection committee announced on Tuesday that the UN chief was chosen for his efforts in promoting women’s and children’s rights, tackling poverty in developing countries, and contributing to the democratization of Middle Eastern countries.

In an official statement, Lee Chul-seung, chairman of the foundation, further cited Ban’s contributions to promoting the issues of climate change and sustainable energy as well as the United Nations’ quick response to condemn North Korea’s failed launch of its long-range satellite Kwangmyongsong-3 in April as reasons that contributed to the selection committee’s decision.

“Personally, I think of this as a deep honor and humbly accept the Seoul Peace Prize on behalf of the United Nations,” said the UN secretary general during his acceptance speech via video feed, “and perceive being awarded on this occasion the prize as a recognition of the efforts of the United Nations to contribute to international peace.”
Ban, who celebrated his 68th birthday on Wednesday, further expressed, “It is especially meaningful to receive the 11th Seoul Peace Prize as a Korean and in the year that my second term as UN secretary general begins.”

A former Korean foreign minister, Ban officially succeeded Ghanaian Kofi Annan, also a recipient of the Seoul Peace Prize, as secretary general in 2007. Ban began his second term this year after unanimously being elected by the UN General Assembly to a second five-year term last June.

Since last year, the selection committee said it screened some 1,300 nominees with great expertise and high morals in economics, politics, society, culture or education. Final candidates that Ban was up against included Aung San Suu Kyi, opposition leader of Myanmar, and Luiz Inacio Lula da Silva, former president of Brazil.

The Seoul Peace Prize, awarded every two years, was established in 1990 to commemorate the success of the 1988 Seoul Olympics.

Former recipients of the award include International Olympic Committee President Juan Antonio Samaranch in 1990, Doctors without Borders as an organization in 1996 and then-UN High Commissioner for Refugees Sadako Ogata in 2000.

The foundation stated that the award ceremony is slated for October in Seoul, where Ban will receive a diploma, a plaque and $200,000.