Saeksilnubi master reaps what she sews

Saeksilnubi master reaps what she sews 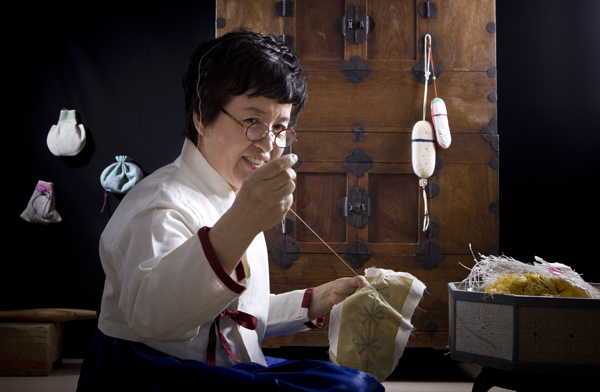 
The hands of 54-year-old Kim Yoon-sun are thick with calluses. Yours would be too if you had been sewing for more than 30 years, especially by using the saeksilnubi method. Saeksilnubi is a complex traditional Korean sewing technique which involves placing hanji, or Korean traditional mulberry paper strings, between two sheets of fabric and making stitches 1.5 millimeters (approximately 0.06 inches) apart with colorful threads following the patterns shown by the strings.

There are two reasons why saeksilnubi can be distinguished from other Korean sewing methods. First, rather than inserting cotton between the fabric sheets in order to provide warmth, saeksilnubi is made with hanji as explained before, for convenient and daily use, thus making the sewn objects lighter and smaller. As well as for its advantage in its practicality for everyday use, Kim remarked that when this technique is utilized, the objects are rendered sturdier and more durable, and also, the hanji placed in the sheets helps to relieve humidity. “The technique of saeksilnubi only exists in Korea and was frequently used to create pouches for tobacco and flints which became vulnerable when exposed to humidity,” she said. The second reason is that although this technique is challenging to execute, the designs are simple and plain: it is this simplicity that appeals to modern tastes.

Kim was first introduced to saeksilnubi when she was in her 20s. She was cleaning out keepsakes of her grandfather’s who had recently passed away, and had found a couple of dusty ssamjis, a Korean term for pouches, and she was surprised at their sturdiness despite their long-term use.

Kim further explained, “I was told that they were cigarette ssamjis made by my great-grandmother. They were decorated in all their splendor, but there was still a hint of simplicity, and I was curious about the handiwork.”

Kim’s curiosity led her to make an exact replica of the artwork, which became her first piece of saeksilnubi. This piece later enabled Kim to receive a prize from the Korean Association for Preservation of Important Intangible Cultural Properties in 1997 and to open her first private exhibition in 1998. The term saeksilnubi was initiated and designated by Yoo Hee-kyung, the then-director of the Costume Culture Association.

Kim also participated in the opening of the Tokyo International Great Quilt Festival at the Tokyo Dome in 2003 and showed her creative works of evening bags and decorative accessories.

Kim has only recently decided to share the practice of her work with the outside world.

The lectures given by Kim start on July 11 and end on Aug. 8, and another program starts on July 12 and runs until Aug. 9. Kim has also published her own book, titled “The Saeksilnubi of Kim Yoon-sun,” and to celebrate the publication, a private exhibition will be held June 22 at the Ah-Won Gallery in Sogyeok-dong, central Seoul.

Kim says, “For busy people nowadays, the fact that you need to meticulously make one stitch at a time can be seen as very arduous and time consuming. Yet I believe that devoting that time to making something for your loved ones cannot be overlooked. Sharing the value of saeksilnubi and continuing to promote it as our Korean cultural asset will forever be my duty.”