Park could be flying higher

Park could be flying higher 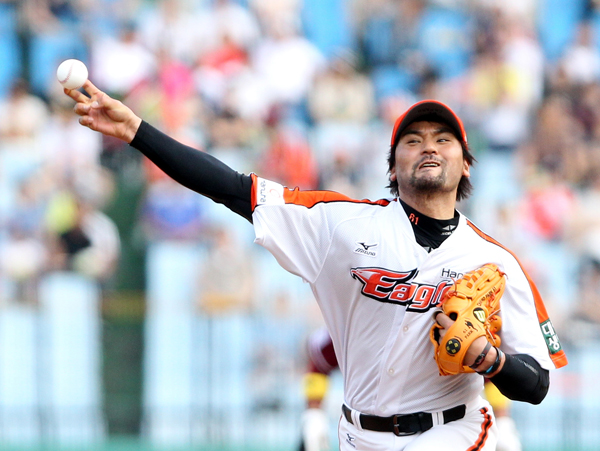 
Hanwha Eagles pitcher Park Chan-ho is suffering an unlucky debut season in the Korea Baseball Organization as the former MLB All-Star picked up his fifth loss on Saturday against the SK Wyverns, despite making another quality start.

Although on paper an apparent mismatch, the game between the bottom-hugging Eagles and the league-leading Wyverns was making headlines before the weekend as two former MLB pitchers were set to go head-to-head, with Dave Bush taking to the mound for SK. On the day, a sold-out crowd of 27,600 fans packed the stadium to see the result.

Park, who has 124 wins in the MLB, more than any other Asian pitcher, was up against Bush, who has 56 MLB wins. Park completed six and one-third innings and allowed three runs.

But this was not enough to prevent the 39-year-old picking up his fifth loss of the season as the Eagles lost 3-1. Park is now 3-5 with a 4.05 ERA.
On Saturday, he seemed to be cruising to his fourth win of the season. Until the sixth inning, the veteran right-hander had allowed just five hits in 77 pitches as the Eagles led 1-0 thanks to a wild pitch from Bush that saw a runner steal home at the top of second inning.

However, Park collapsed in the seventh. After walking leadoff hitter Park Jung-kwon, he gave up a double to An Chi-yong and then walked Park Kyung-oan, loading the bases with no outs.

The former Los Angeles Dodgers pitcher followed this by hitting Cho In-sung on a wild pitch, then giving up a sacrifice fly to Jeong Keun-woo to give the Wyverns a 2-1 lead.

As reliever Ma Il-young allowed another single run, Park ended up with three earned runs against him on the final scorecard.

Although he was shaken in the seventh, Park still managed to notch his sixth quality start in 11 appearances this year. Yet these have been no guarantee of a win for the team, as four of his quality starts have come amid losses, making Park one of the unluckiest starting pitchers in the KBO.

Statistics show he has suffered from a lack of support from his offense. For seven of the 11 games he has featured in - always as a starter - the Eagles have only managed a maximum of two runs.

Park has pitched a total of 60 innings, during which the Eagles batters have produced just 23 runs, one of the worst records in the league. When averaged out, this means the team would have scored 3.45 runs for every nine innings he pitched.

Due in part to his relief pitchers not pulling their weight, Park has racked up a high ERA in 11 games. He has left 13 runners on base when leaving the mound. Of these, nine have gone on to score, pushing up the bullpen’s Inherited Runs Score to 69.2 percent.

Pundits blame Park for giving his relievers added pressure, but if they had done their job better, his ERA should have been somewhere between 3.00 and 4.00. In fact, statistics show that among Park’s 33 runs allowed, nine - seven earned - were from relief pitchers.

As of Saturday, Park has the second-best opponent batting average with runners in a scoring position (.177) after Nexen Heroes’ Brandon Knight (.155).

It seems the MLB All-Star is finding his own way to impress KBO fans, but a little more support from his teammates wouldn’t go amiss.