This nighttime view shows the restored Namsumun, the southern water gate, of the Hwaseong Fortress in Suwon, Gyeonggi. By Choi Jeong-dong

Queen Min (1851-1895) was murdered by the Japanese in her own palace and King Yeonsan-gun (1476-1506), thought to be the dynasty’s most perverted tyrant, launched bloody purges of the elite. But perhaps the most dramatic of all, Crown Prince Sado (1735-1762), died of hunger and thirst after being locked in a rice chest for eight days on the order of his father King Yeongjo (1694-1776).

Nonetheless, Sado’s son grew up to be one of the most respected Joseon monarchs: King Jeongjo (1752-1800).

Historians today view highly his efforts to bring a “renaissance” to the Joseon economy, society and culture. Nonetheless, King Jeongjo had to withstand constant threats from the faction that was responsible for the death of his father. 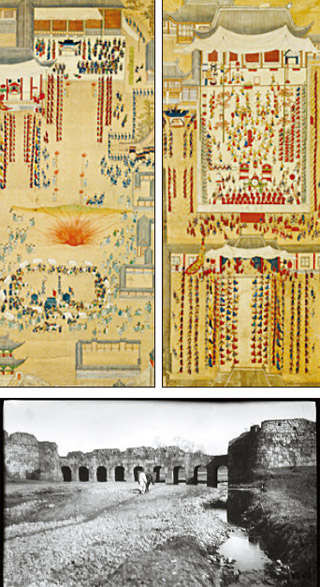 Top: A 1795 work by Joseon court painters, including Kim Deuk-sin, of the royal procession to the Hwaseong Fortress. Bottom: A 1907 picture of the Namsumun before the 1922 flood that destroyed it [JoongAng Ilbo]

To understand King Jeongjo and his vision, a visit to the Hwaseong Fortress in Suwon, Gyeonggi, is a must.

Rght after being enthroned, King Jeongjo declared: “I am the son of Crown Prince Sado.” He moved his father’s tomb from Yangju, Gyeonggi, to Suwon. He also built a 5.52-kilometer (3.4-mile) fortress, which encompasses a palace and supporting structures.

Historians say the fortress not only represents King Jeongjo’s love of his father, but also his vision to usher in a better, more advanced era away from Seoul, where he was besieged by opponents.

The Suwon government announced earlier this month it had restored one of the two water gates in the fortress. The restored gate is called Namsumun, literally the southern water gate. Namsumun was destroyed in a flood in June 1846 and soon rebuilt, according to royal protocols. It was again destroyed by flood in 1922 and left unrestored until now.

Just like the Cheonggye Stream in central Seoul which has emerged as a tourist attraction after its renovation in 2005, Suwon Stream begins at Gwanggyo Mountain in the northern part of the city and flows through the fortress.

Hwaseong Fortress - constructed from 1794 to 1796 - is a Unesco Cultural Heritage Site in addition to being Korea’s Historic Site No. 3.

“The restored Namsumun will be an important structure in Suwon as it will not only be a bridge, but also control the flow of Suwon Stream,” said Yeom Tae-yeong, the mayor of the city, at a ceremony on June 9 that marked the completion of restoration.

The restored Namsumun is 29.4 meters (96 feet) long, 5.9 meters thick and 9.3 meters high with nine water gates below it, very close to its original form. The restoration started in June 2010 and cost 12 billion won ($10.26 million), according to city officials.

In order to make sure the structure is not destroyed again, officials say they have reviewed precipitation data for the past 100 years as a basis for the installation of separate waterways that would handle excess flow.

What makes Namsumun special is that while it’s a water gate, it was built so that it could also function as a tool of defense in times of war. There are holes where people can fire weapons at enemies from inside the fortress.

And some critics have pointed out that the holes are reconstructed slightly differently from what is recorded in the royal protocols on Hwaseong Fortress, to which a city official responded, “The restoration came after seven rounds of consultation with experts within the Cultural Heritage Administration.”

Meanwhile, the city of Suwon has planned many events and programs to mark the 250th anniversary of the rice-chest death of Crown Prince Sado. The Suwon Hwaseong Museum is holding a special exhibition on relics related to him through July 1 and an academic conference on him on June 28.

Also the city will hold a walk from Changdeok Palace in Seoul to Hwaseong Fortress between July 29 and Aug. 1. Now in its ninth year, the event is a reenactment of a royal proceeding in which Jeongjo took part when he visited the fortress.