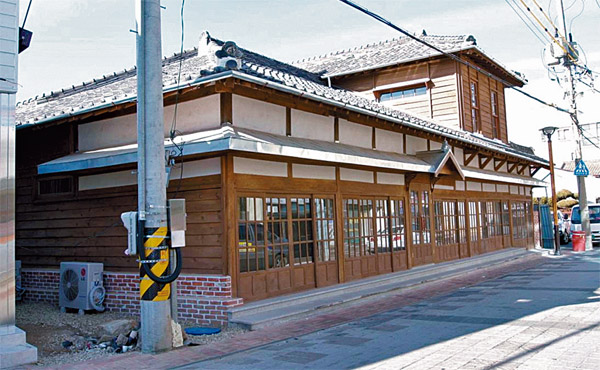 The restored Boseong Inn in Boseong County, South Jeolla, will be used for a variety of purposes and will host seminars, performances, exhibitions and cultural exhibits. [YONHAP]

For a long time, policy makers had refused to acknowledge buildings and relics of the Japanese colonization of the peninsula (1910-1945) as part of Korea’s cultural heritage. Instead, they were seen as reminders of a painful past best forgotten.

But that position has begun to change over the past several years.

Much media attention was given to the restoration completed earlier this month of the Boseong Inn, which dates to the 1930s and is located in Beolgyo, Boseong County, South Jeolla.

The inn was built in 1935 and consists of a two-story wooden building with the mix of Japanese and Korean architectural features - Japanese roof tiles and tatami mats - and a single-story Korean-style brick house.

In fact, Beolgyo was a city developed by the Japanese that served as an advance base for Japanese who came through the nearby Yeosu port to trade their goods.

To many Koreans, the building is better known as one of the settings of the 1980s novel “Taebaek Mountain Range.” The book by Jo Jung-rae tells the story of Korea’s partition into the North and the South after its liberation from the Japanese occupation and is deemed one of the most important books in contemporary Korean literature.

The book was later made into a 1994 film of the same name that was directed by Im Kwon-taek.

“The building was a five-star hotel back then,” Jo told reporters at a June 7 ceremony marking the restoration of the inn.

He grew up in the area and passed by the inn as a boy. “Koreans have just abolished all the buildings and relics of the Japanese colonization, and that, in fact, helped Japan get away with its wrongdoings,” he said. “In that sense, the restoration of this inn has much significance.”

The Boseong Inn was later used as a residence and shop. In 2004, it was registered as Cultural Property No. 132 ? a title given to properties from the late 19th and early 20th centuries.

Officials from the Cultural Heritage Administration say the restored structures will be used in a variety of ways, including as an exhibition hall, cafe, seminar room and performance venue. They will also offer lodging.

“When I made the film, I visited the inn and it was on the verge of collapse so I couldn’t film it,” said director Im, who also attended the ceremony celebrating the completion of rennovations. “Now that we are restoring what’s old and people are paying attention, it feels good.”