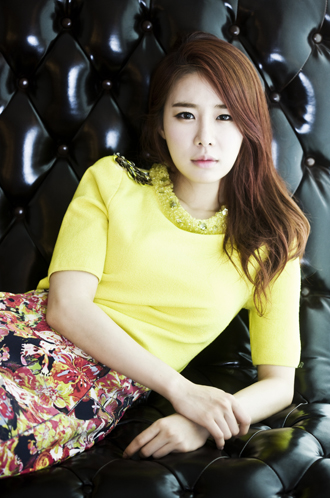 Yoo In-na has staked out a role as a respected professional after starring in the tvN drama “Queen In-hyun’s Man.” By Kwon Hyuk-jae

After starring in her first major drama in tvN’s “Queen In-hyun’s Man,” actress Yoo In-na has gotten industry insiders to take her seriously. The plot of the drama centers around obscure actress Choi Hee-jin, played by Yoo, who falls in love with time-traveling noble Kim Boong-do (Ji Hyun-woo) from the Joseon Dynasty (1392-1910) who jumped 300 years to the 21st century.

With an animated and talented cast, and a tensely packed storyline, “Queen In-hyun’s Man” topped the charts and ranked as the No. 1 drama on the cable channel.

As she grows more prominent, the actress has also earned very strong support from younger viewers. But success can take its toll. When this reporter met her early this month in Yeouido, western Seoul, her worn-out appearance could not go unnoticed, and when this was pointed out, Yoo responded, “I’ve become very absorbed in Hee-jin’s character and lost a lot of weight from crying so much.”


Q. As “Queen In-hyun’s Man” nears its end, what are your thoughts?

A. During the film, I didn’t just act as Hee-jin, but I lived as the character. Yesterday [June 3] was our last time shooting, and I cried so much and pestered staff members by asking, ‘How can I go on as boring Yoo In-na?’ ‘Queen In-Hyun’s Man’ was the first drama in which I played a major role. Starring in it was also my way of showing my gratitude to those who have believed in me, and I am very happy that it turned out so well.

Was it difficult to jump from one era to another within the same story line?

When I thought too much about it, I thought my head would explode. So yes, it was indeed very difficult. That was why I decided to only focus on Hee-jin the character and on the emotions she felt toward Boong-do. I did not even read the parts of the script in which Boong-do lived in the Joseon Dynasty because Hee-jin would not have known about those parts either.
And unlike my previous roles in dramas like “High Kick! 2,” “Secret Garden” and “The Greatest Love,” my character had to shed a lot of tears in this most recent drama. Such emotionally involved acting was another great opportunity to reveal a different side of my acting skills and personality.

It must have been tough to cry so much.

In all honesty, I am not very good at crying on cue. I have to be truly sad in order to cry. But that wasn’t a problem in this drama because its plot truly moved me. I was unable to control my tears. Especially in the scene where I had to playfully make Boong-do’s amulet disappear even though the atmosphere was supposed to be light-hearted, it was hard to hide my grief. I realized that it was because I was so worried that Boong-do would not be able to return home, the Joseon Dynasty. One time the shooting even had to be paused because I could not stop crying.

Just as your character grew personally in this drama, you seem to have grown a lot as an actress while filming “Queen In-hyun’s Man.” Did you sympathize a lot with Hee-jin even as you were portraying her on screen?

I started to prepare for my career as a singer when I was 17 years old, and I made my debut in the drama “High Kick! 2” at the age of 27. My debut was very much delayed, and that is why I knew how Hee-jin felt at the beginning of the story. Nevertheless, I am thankful for my long period of obscurity. If I were asked what I would choose between making my debut as a 17-year-old star or performing in “High Kick! 2” at age 27, I would choose the latter without any hesitation. As time went by, I came to dream of being not just a plain entertainer but a real, authentic actress.

How similar is Hee-jin to Yoo In-na?

I think I can relate to Hee-jin’s imprudence and her tendency to be just too cute. As well as having a similar personality, I also feel attached to Hee-jin because we share the same profession. Still, I think Hee-jin is a bit tougher than I am. I remember that when I was young I would yearn for a pill that would make me feel more secure and fiercer. Hee-jin wouldn’t need such a pill to supplement her natural personality.

Professionally, how did you persevere through years of obscurity while trying to make it big?

I lived like a fool who only thought of what she wanted to do and didn’t quit until I got it.
The principal reason why I changed my focus from singing to acting was that acting allows for more flexibility when it comes to age. As a singer, you only appear on stage for a limited number of years. However, as an actor, your roles change as you age. If I did not make my debut in my 20s, I knew I could play an aunt in my 30s or a mother in my 40s. Yoo In-na is simply a physical shell onto which any character can be applied.

You are also popular as a DJ on the KBS program “Let’s Crank Up the Volume.” Could you talk a little about that?

At first, a lot of people were worried about me hosting the radio show, but now, I feel like I have a big family who supports me all the time. But I also feel a responsiblity to make my radio family happy. There were many instances where we had to work with prerecorded broadcasts due to my drama schedule, and I felt so distressed during those times, just like a mother who goes to work without making her child’s breakfast.