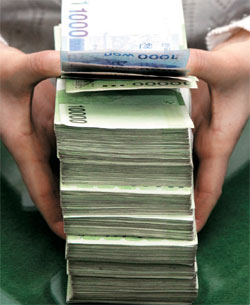 Household debt has become a hot potato in the financial market as concerns mount over rising overdue payments on loans.

In a meeting with heads of commercial banks Friday, Kim Choong-soo, the governor of the central bank, asked them to ramp up their management of loans.

“This year the overdue payments on syndicated loans have gone up,” Kim said.

The commercial bank heads said in the case of syndicated loans the overdue payments are the result of a feud between homeowners and construction companies, and when the two sides reach agreement, the problem will be eventually solved. However, the bank heads acknowledged that if the economy enters a recession, overdue payment on household debt could become a big risk for the economy.

The Korea Chamber of Commerce and Industry Thursday released a study estimating that household debt was equivalent to 81 percent of the nation’s gross domestic product. This is much higher than the 73 percent average for the Organization for Economic Cooperation and Development member countries.

Additionally, the household debt ratio to GDP was not only higher than Greece’s 60 percent, it was almost the same as Spain’s 81 percent.

Last year’s household debt grew nearly 10 percent from the pervious year. This is the third-highest jump among OECD members after Greece, with 12.1 percent growth, and Turkey’s 10.8 percent.