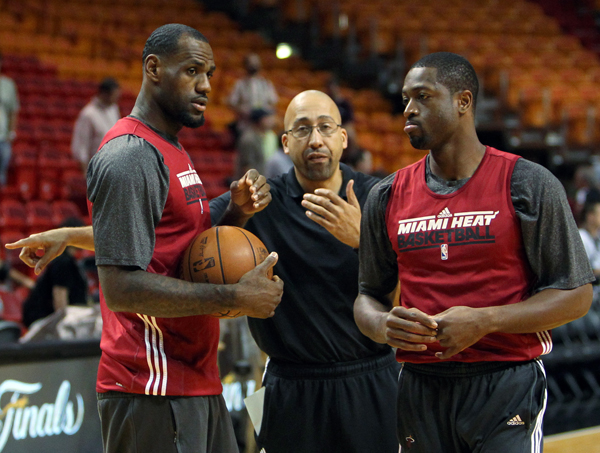 
MIAMI, Florida - The Miami Heat are proud of their home-court prowess and expect to use that confidence in Sunday’s (Monday morning, KST) third game of the NBA Finals against the Oklahoma City Thunder, LeBron James said on Saturday.

“You always want to be dominant at home and protect home. You want to try to establish that,” James told reporters after practice at the American Airlines Arena where the Heat is hosting Game 3 of the best-of-seven series.

Miami, whose 28-5 home mark tied them with the San Antonio Spurs for the best in the NBA’s regular season, evened the series 1-1 with Thursday’s road win in Oklahoma City, and both teams were trying to find the right frame of mind for Game 3.

The next three games will be played in Miami, and a home sweep would turn the Heat into NBA champions.

“When people come into the building they feel like they’re at a disadvantage already before the game starts,” three-time NBA’s most valuable player James said.

Kevin Durant, who at age 23 has led the NBA in scoring average three times, reversed the psychology and said the Thunder relished the challenge of a big game on the road.

“I think the best thing about being on the road is you have to come together as a group even more,” said Durant, who has averaged 34 points to 31 points for James in the first two games.

“Everybody in the stands is against you. The other team, of course, is against you, so it’s kind of fun being like the villain on the road. We’re looking forward to a tough Game 3. It should be fun.”

Chris Bosh, showing signs of returning to full strength after missing nine playoff games with an abdominal strain, said the Heat were looking to press their advantage.

“There is pressure on both teams to win this game. We have a home-court advantage now. We want to keep it that way,” said Bosh, who had 16 points and 15 rebounds in Miami’s Game-2 win as he returned to the starting lineup. Heat coach Erik Spoelstra was philosophical.

“They’ve had two days probably to get beat up, and people to come up with whatever story line and motivation for them,” said Spoelstra.

“We got off to a bad start. That’s obvious to everybody,” said Thunder coach Scott Brooks. “There’s a lot of things that we could have done better, and hopefully, [at] Game 3 we do better.

“We have to get our mind-set right, very similar to what we had with the road warrior mentality in Game 2.”