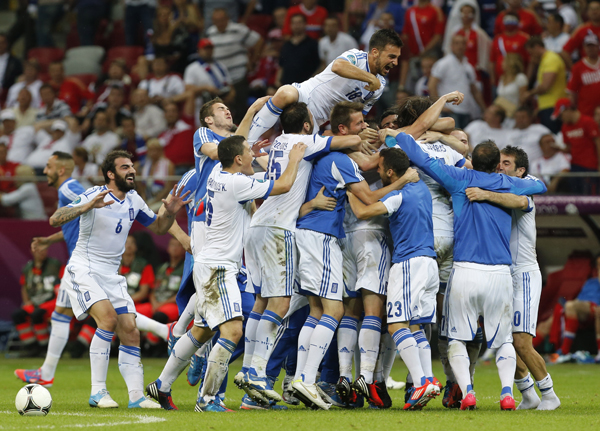 Greek players celebrate their 1-0 win against Russia in their final Group A match at the Euro 2012 football championship in Warsaw on Saturday.[AP/YONHAP]


WARSAW - Greece and the Czech Republic, written off after poor starts to Euro 2012, completed astonishing turnarounds on Saturday with 1-0 wins over Russia and co-host Poland to reach the quarterfinals against all odds.

Greek captain Giorgos Karagounis scored in first-half stoppage time for the 2004 champion who had taken only one point from its first two games and was given almost no chance of beating the confident and impressive Russians.

Petr Jiracek turned party-pooper when his 72nd-minute goal silenced hundreds of thousands of Polish fans gathered in fan zones in Polish cities of Warsaw, Gdansk, Wroclaw and Poznan, many of whom went home soaked after torrential downpours in the latter two venues.

Police and calculators were out in force as the final round of Group A matches got under way amid tensions between Russian fans and their Polish hosts and against the unhappy backdrop of another racism case.

Croatia became the first country to be charged over racism as UEFA’s disciplinary panel, which has been working overtime on a string of cases involving fireworks and missile-throwing by fans, opened proceedings for chants by its supporters against Italy.

Karagounis, winning his 120th cap, remembered the difficult situation back home after a game played on the eve of an election which could decide if Greece stays in the euro zone and spread turmoil across global financial markets.

“The moment is pure magic for all of us,” said Karagounis. “This night is very important, it is something important for Greece for all Greeks. We said we would give it all, despite all the difficulties.”

The Czechs finished top with six points, becoming the first team to win a group at the tournament with a negative goal difference, followed by Greece and Russia on four and Poland on two.

Greece went through with the better head-to-head record against Russia, a system which is increasingly unpopular because of its complexity and throws up dozens of possible connotations especially when three teams finish level on points.

The Russians, who dominated the match and paid the price for missing a flurry of chances, would have progressed under traditional goal difference which many fans would like to see brought back.

“We went out there to win the game, not to draw,” said Russia’s Dutch coach Dick Advocaat. “Even though we lost today we played brilliantly in the first half, then they got a goal, and that told a different story.”

Their absence may at least reduce the tensions which boiled over on Tuesday when Polish hooligans set upon a group of Russian fans marching to the stadium for the politically-charged match between their respective teams.

There were no reports of any trouble this time although the Russian federation could be in trouble after fans let off more fireworks in the stadium.

Russia has already been fined 120,000 euros ($152,000) for setting off fireworks and displaying “illicit banners” against the Czech Republic, and has been warned it will be docked six points in the Euro 2016 qualifiers if there is a repeat.

For the third game in a row, Poland paid heavily for failing to convert any of the chances they created in a bright opening.

Most of the first half was played in a violent thunderstorm with lightning flashing around the stadium and when the rain eased off, so did Poland’s attacks.

The Czechs, winners in 1976, took control and stunned the home crowd when Jiracek took a pass from Milan Baros and jinked away from a defender before slotting past keeper Przemyslaw Tyton for his second goal of the tournament.

Off the field, Croatia was in trouble over alleged racist insults by their supporters at Italy’s Mario Balotelli.

The Football Against Racism in Europe (FARE) network, which works closely with UEFA and has two “international monitors” at each Euro 2012 game, tweeted on Friday that its observers reported “between 300 and 500 Croatian fans were involved in racially abusing Italy striker Mario Balotelli.”