Appliance makers on back foot over patents

Appliance makers on back foot over patents 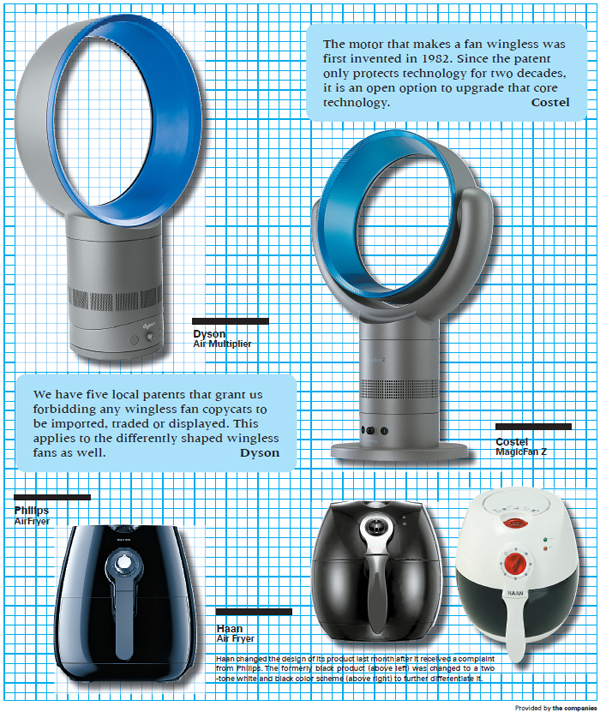 Korean companies are on the defensive after being accused by global home appliance makers of copying their core technology and designs, with one local SME agreeing to change the color of its air fryer and the other taking a different tack by filing a defamation lawsuit.

Haan has agreed to change the color of its frying pan that works without the use of oil after Philips issued a written statement giving Haan a chance to redress the situation before it considers taking legal action.

In its petition submitted to the local police office early this month, Costel said its products have nothing to do with the patents Dyson acquired. It also said the two distributors threatened Costel and its client stores with legal action over its MagicFan Z.

Wingless fans use high-speed motors located at the bottom of the appliance and were first introduced in Japan in 1982, but the core technology is open for anyone to use because patent rights only last for 20 years, according to Lee Jae-joon, director of Costel’s product planning division.

“All we did was upgrade the already existing open technology,” said Lee.

He said the company does not expect the distributors to challenge the lawsuit as they have not responded yet.

Dyson’s Korean public relations agency, Comm101, said that Dyson’s headquarters in the U.K. have not officially commented on the matter.

Costel said the controversy has caused sales of its products to be delayed at retail stores by up to one month due to the risk of impending legal action.

“Because of the rumor, sales of the products at home shopping channels have been delayed by a month,” said Lee.

The product is currently being sold at department stores and online markets.

“As we responded to Dyson’s false accusation and sued them, many retailers are now asking Dyson to explain why retailers should not display our products,” Lee added.

In contrast, Haan has avoided an all-out war with Philips after the Dutch company contacted it last month raising suspicions of the similarities between their respective air fryers.

“We don’t want to pursue any legal action with global companies because we are concerned that drawn-out lawsuits could hurt our reputation,” said Lee Seung-hyun, assistant director of Haan’s communications division. “So we decided to change the color of our product.”

Haan’s air fryer, which used to be all black, is now white on top and black on the bottom.

“Black is the preferred color for kitchen appliances because stains are not as noticeable,” said Lee.

Haan said it is developing a new design to be released in late September that will further differentiate its product to prevent similar disputes cropping up.

“We are reviewing several options so consumers can differentiate the products at a glance,” said Lee.

The company said it has not been in contact with Philips since May.