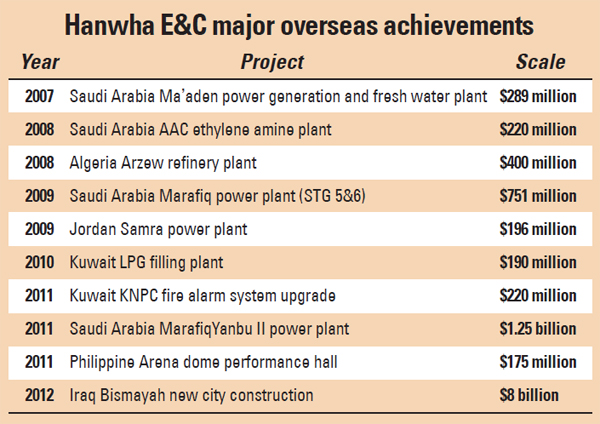 Hanwha E&C is accelerating in advancing to the overseas construction market after signing the contract for an Iraqi new city development. It recently announced its vision to step up as a “global total construction company” by strengthening its management and also set up a goal to raise its overseas construction sales to 50 percent by 2016. Hanwha has accordingly modified its business trajectory to serve large and high value-added business and will expand its business from Middle East countries to Southeast Asia and Africa in plant field. In engineering and construction the company will use its new city construction and infra-structure experience and actively participate in reconstruction projects in the Middle East, such as in Iraq. In the mid- and long-term the company will concentrate in developing the FEED and IPP fields.

The ace of Hanwha E&C’s overseas construction is the power generation and chemical plant field. Based on the technology and experience of constructing the Yeocheon NCC and Hanwha Chemical Ulsan and Yeosu complexes, the company has advanced to the Middle East region and is showing remarkable results.

The company also received orders for the world’s largest scale indoor dome arena, the Philippine Arena Dome performance hall. The construction industry says that the reason Hanwha E&C was able to succeed was due to its “selection and concentration” strategy. Based on its abundant construction experience in Korea, the company has received orders for which it has much experience. Through systemized management the company is able to maximize a profit.